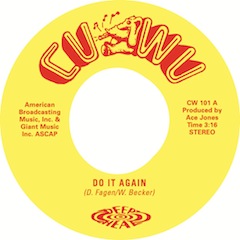 Ain’t it funky, now. Chicago’s Numero Group, in celebration of the label’s tenth birthday, is dropping a limited edition  Eccentric Soul 45 box set next week entitled Omnibus. Which, naturally, contains 45 7″ singles. Each record comes tricked out with its own replica label and sleeve,   coupled with a 108-page hardback, clothbound, book.

The label has been announcing the individual tracks daily on their blog over the past month, including this addition — manna for Steely Dan freaks: Deep Heat’s 1974 take on Becker and Fagan’s “Do It Again“. Label notes, below.

“C. W. “Ace” Jones was decidedly behind the times in terms of promotion, distribution, and overall sound quality, but he knew he had the ingredients for a hit single in 1974. The classifieds and Jones’ connections provided the kindling for Deep Heat, linking up Jesse Richards, Michael Brown, Levell Siders, Greg Patton, and Lyall Hoggatt. They spent all of 1974 rehearsing and encoding eight solid songs to magnetic tape in Jones’ ramshackle recording studio. But Jones was cheap, and all they got from the sessions was Steely Dan’s”Do It Again” b/w their original “She’s A Junkie (Who’s The Blame).” Bookings boosted thanks to studio time, but gigs were rare as Deep Heat preferred the company of hippies and pot dealers to paying supper-club patrons. Membership cooled into day jobs or further states of ennui, making it easy for the heat to dissipate completely by 1977.”