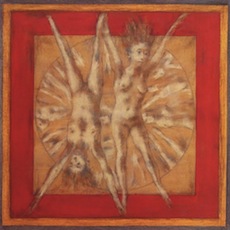 Is this the sound of the band in heaven? It might be. Echo-laden pianos, angelic female vocals, droning sitars, light disco beats, celestial harps. If that all sounds a little bit New Age-y to you, well, you might be onto something. But Mad Music is no snoozefest — it’s a transportive, immersive experience that’s as blissful as it is mysterious. See, no one actually knows who created this record. Or if anyone does, they aren’t talking.

The facts: Sometime in the late 1970s, LPs stamped with the name Mad Music, Inc., were pressed up. No track names, no personnel listings, no nothing. Slowly, a few of these LPs made their way into the hands of collectors. The press release on Yoga Records’ website doesn’t shed much light: “The primary creators wish to remain anonymous. A few of the names of the professional studio musicians who played on the record might be familiar to aficionados of the disco era … The album was created in part for research and therapeutic purposes, but that’s all we can say.” Curiouser and curiouser. So here we are, left only with the sounds made by this heavenly music corporation. But that’s enough. words/ t wilcox