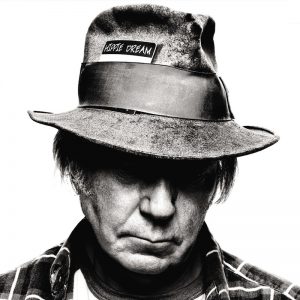 Coming on the heels of the vexing Americana comes Neil Young & Crazy Horse’s second album of 2012, the double disc Psychedelic Pill. And it’s a doozie. Longtime fans of ol’ Shakey have begun, in recent years, to resemble battered wives. High ticket prices, ludicrous marketing antics, terrible records, and the kind of vanity projects that only result when senility, wealth, and madness intersect have increasingly exhausted the patience and goodwill of even his most ardent defenders. But long suffering fans choosing now to cut ties with their mercurial hero do so at their own peril, for to ignore this monster of an album is to miss out on one of the most potent and rewarding Neil Young records in years.

Psychedelic Pill opens audaciously with “Driftin’ Back” a 27 minute long workout that finds Neil vaguely free-associating about religion, mp3s, and haircuts. Neil still wouldn’t know a bridge if he drove over one, but that’s the way we like him, and “Driftin’ Back,” despite all logic, justifies its length with an infectious chorus, building intensity, and the kind of perfectly decadent solos that only Crazy Horse — and maybe Endless Boogie — is capable of delivering in 2012.

The mercifully brief title track is redeemed by “Ramada Inn,” a slowly unfolding tale of empty nest syndrome that explores the tedium and estrangement of a married couple confronting their twilight years. Inside the song’s seventeen minutes, the characters bicker, visit old friends, and inevitably ‘rise into the day, holding on to what they’ve done.’ It’s a moving, unpretentious picture of devotion despite the odds, a return to the themes explored on Harvest Moon. The lyrically trite “Born In Ontario,” on the other hand, continues Neil’s trend toward the univocal and the maddeningly folksy (see: “Buffalo Springfield Again”). Sounding as if he is making lyrics up on the spot (which, if true, still doesn’t excuse rhyming ‘south’ with ‘months’), Neil rattles off barely-rhyming banalities that should send even a Black Keys fan into convulsions. Somehow, the song is irresistible despite this — such is the mystery of Neil.

Disc two opens with the nostalgic (sensing a theme here?) “Twisted Road,” with Neil wistfully name-checking Bob Dylan, Roy Orbison and the Grateful Dead, while “She’s Always Dancing” is the album’s obligatory deification of an unattainable feminine ideal, a theme that has preoccupied Neil for so long he can almost lay claim to having invented it.

Neil’s earlier reference to Orbison comes full circle on the album’s lone ballad “For The Love Of Man” when he concludes the song by reaching for — and hitting — a high note well out of his range, sounding, for a brief moment, spookily like his hero. “Walk Like A Giant” is a melodic close cousin to “Hey Hey, My My,” though its titanic length has predictably inspired fans and critics to superficially compare it to Crazy Horse epics like “Down By The River” and “Cortez The Killer.” Though “Giant” isn’t really on par with those masterpieces, it does showcase some of Crazy Horse’s best performances since Ragged Glory, especially as the song reaches its blistering, noisy second half. At some point, Neil gets it into his head that he’s auditioning for Comets on Fire, and when then things finally do cool down, they do so menacingly, as the entire band mimics the sound of a giant’s slow, lumbering stomps toward a cowering city. All the while, Neil’s trusty Les Paul is front and center, rattling as distinctively as the vibrating third rail preceding a locomotive. You could say he’s back to his old ways. words/ j jackson toth