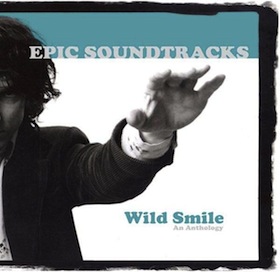 Heads were undoubtedly scratched in confusion when Epic Soundtracks‘ debut album, Rise Above, hit shelves in 1992. After all, Epic Soundtracks (born Kevin Paul Godfrey) was then best-known for being one of the madmen behind Swell Maps, the band that released some of the most thrillingly experimental post-punk music of the late ’70s and early ’80s. And now he’d gone and recorded … a Carole King record? But any doubts as to the quality of Epic’s new approach were dispelled almost immediately, thanks to Rise Above’s glorious opening track, “Fallen Down.” With a creamy, AM-radio friendly melody, Epic’s heart-on-sleeve lyrics and a gold-flecked guitar interlude courtesy of Sonic Youth’s Lee Ranaldo, it set the stage for a wonderful, if-all-too-brief second act. Epic Soundtracks only completed two more woefully underappreciated LPs before passing away in 1997.

But the music is still worth discovering. “Fallen Down” is included on the recent, two-disc Wild Smile anthology, which features highlights from Epic’s three albums, and brings to light a host of previously unheard rarities. Once you’re hooked, you’ll want to hear each of his records in full, but the comp works perfectly as an intro, showcasing the man’s classic pop sensibilities, his beautiful arrangements and all-around heartfelt vibe. On paper, Soundtracks’ lyrics might look like strings of well-worn cliches and girls’ names, but they work perfectly in context. Epic was nothing if not a true believer, and pretty much every note he played rings true. Lovingly put together by Soundtracks’ friend (and creator of the excellent What A Nice Way To Turn 17 zine), Chris Coleman, Wild Smile is an essential 2012 listen. words/ t wilcox

One thought on “Epic Soundtracks :: Wild Smile (An Anthology)”