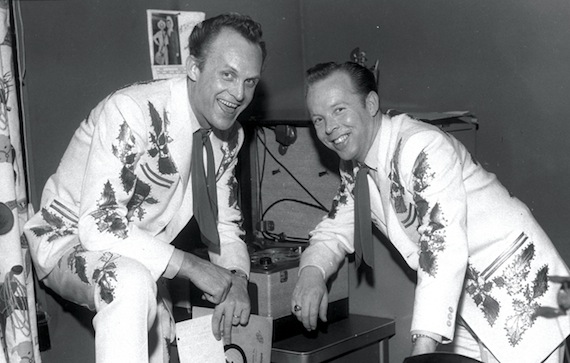 Christmas music: It ain’t for everyone. But then, it is for some. In later years, I’ve gravitated more towards the solemn, poetic hymns that predate by a matter of centuries the sentimental oom-pa-pa of most Christmas music. (Though, that being said, I’m a total sucker for “Jingle Bell Rock”; forgive me.), and Christmas With the Louvin Brothers is just as solemn as you’d expect. It’s strange, and compelling, to hear those heavily accented voices chiming over the familiar words of “O Come All Ye Faithful,” say, and the songs’ compositions force their harmonies into even tighter quarters; at times, they sound like an Appalachian Simon and Garfunkel. There’s a sparseness to the music–touches of pedal steel, gently fingerpicked acoustic guitar, spangles of tremoloed guitar floating just behind “Silent Night”–befitting the songs’ reverent sincerity. And the way that reverence spills over into hokey bonus track “Santa’s Big Parade” gives that song its awkward charm; its guitars bop around with a restrained jangle, and when Santa shows up, he sounds like a radio announcer slumming it between Brylcreem ads. words/ m garner
Check it out on Spotify.
Posted on December 20, 2012Holiday The Louvin Brothers

2 thoughts on “Christmas With The Louvin Brothers (1961)”