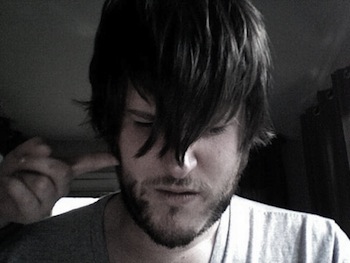 Wrapping one’s head around the music of Wooden Wand, the ongoing project of idiosyncratic singer/songwriter James Jackson Toth takes some effort. With over 100 releases to his name, from spiraling freak-out ragas and avant-garde experimentation to classic Asylum Records-style folk pop — Toth skips through styles like a zealous host swapping out LPs on the turntable at a party.

2011’s Briarwood was a smoky slab of country funk, one of the strongest entries in Toth’s extensive catalog, but his brand new Blood Oath of the New Blues finds him indulging more esoteric impulses, exploring looping crime story like “Southern Colorado Song,” lonesome folk with “No Debts,” and droning expanses with “Dungeon of Irons.” The melodic elements of Briarwood are still there; only they’re pulled and expanded, stretched across the new record’s meditative ballads.

AD: This marks the first successive Wooden Wand record to be recorded with the same group as the previous, correct?

James Jackson Toth: More or less. Wooden Wand and the Vanishing Voice had a pretty stable lineup, but since I’ve been doing solo stuff, I’ve definitely favored the revolving door approach. But we did [Blood Oath of the New Blues] in the same studio with the same people as [Briarwood]. It just works. I’m definitely going to record with them again. It’s good, as long as they can tolerate me, and I don’t alienate anybody [laughs].

AD: Briarwood and Blood Oath of the New Blues sound very interesting back-to-back. I imagine there are fans yours that favor one “thing,” or one Wooden Wand style more than another.

AD: This record feels like it unites a lot of your sounds. I imagine it wasn’t intentional, but when you listen to it, do you get a sense that it ties together some of the disparate styles you’ve explored?

James Jackson Toth: Yeah, I think it does. Like you said, it wasn’t really intentional, but it does feel like a culmination at this point. There’s a lot of Wooden Wand material out there, and often you’re posed the question, “What one record would you tell someone to buy to get a sense of what you do?” I didn’t really have a good answer to that question. Like you said, I move around quite a bit and try different things. It’s a really good distillation of the many hats we’ve worn over the years.

AD: Briarwood was very straightforward, but Blood Oath sort of pulls at some of those melodic elements, and expands on them. You start out with a double track, “Bed For Beatle Wand/Days This Long,” and it’s almost 12 minutes long.

James Jackson Toth: Yeah, that’s audacious of us. But I think it works as far as sequencing goes.

AD: Was the idea there sort of an “enter at your own risk” statement, a sort of command to just settle in for the ride?

James Jackson Toth: [Laughs] Yeah. I like records, like Blood Oath, that function best with your undivided attention, when you’re relaxing with your favorite libation. It’s not really music to do chores to or to clean up to. I don’t think it functions the way it should if you’re distracted by something else. I love records that are the opposite; I want to put something on when I’m going to do the dishes. I’m not going to put on [Leonard Cohen’s] Songs from a Room. I think music has different functions that way. This record is a pure quiet reflection record, whereas Briarwood was more of a rock ‘n’ roll record. This was more about textures, pulling the songs apart. The next one will be totally different too.

AD: There’s backwards masking on this one too —  or is that just a joke Fire Records is circulating?

James Jackson Toth: Oh no, we really did it. [Laughs] A lot of us in the band grew up listening to heavy metal, and we just wanted to put some spooky stuff in there. It’s subliminal —  I don’t want to give away any secrets. Hopefully we won’t get into Judas Priest-esque lawsuits. [Laughs]

AD: I imagine the people picking up Wooden Wand records today might not be the same people who were picking up Judas Priest records in the ‘80s, when that kid shot himself.

James Jackson Toth: [Laughs] “Do it, do it, do it.”  When I was a kid, I listened to that stuff. There was this controversy about the Ozzy song, “Suicide Solution.” I was really into Mercyful Fate, King Diamond, and stuff like that. I just miss the feeling of getting spooked by a record, when you’re listening to it alone and maybe you’re high or something like. You hear things that maybe aren’t there. I miss that feeling, and I haven’t had that in a long time so I wanted to make a record that had those things going on.

AD: That points to the direction of what kind of record this is: you’ll miss that stuff if you’re not really paying attention.

AD: You speak directly of “the blues”  in the song “Outsiders Blues.” I’m curious what you’re getting at with the idea of “the new blues,” referenced in the title.

James Jackson Toth: I think the word “blues”  evokes something really strong. I listen to a lot of old blues records. I’m kind of obsessed with Son House, Skip James. There’s also the fact that there’s Neil Young’s On the Beach, with “Ambulance Blues,” “Vampire Blues,” and “Revolution Blues.” But also it is sort of in the parlance of feeling bad. Away from the musical idiom, you just get “the blues.” Feeling bummed. So I think it works on a lot of levels.

AD: “Southern Colorado Song”  is about the Dougherty Gang [whose multi-state crime spree made national headlines]. Where did you first discover that story, and what about it spoke to you?

James Jackson Toth: I try and follow the news, especially stories like that. I don’t really get too involved with political stuff, and I don’t really watch television or anything, but I do follow the news. Human interest stories, I guess you’d call them. I just felt it was in line with what we’re talking about, those sort of wasted pre-teen or teenage years. In my mind the Dougherty Gang would probably be listening to the equivalent of those Mercyful Fate records, you know? I don’t know what that would be now, probably DJ Screw or something. There’s something [about them that’s] just subculture, or counter-cultural [about them], without them even knowing it, just by them being young.

I wanted to write just a non-judgmental exploration of the saga, without getting too Springsteen with it. Nothing against Springsteen —   I love the Boss. But I didn’t want to do a preachy thing; I just wanted to tell the story in a way that focused on the myopic, mundane qualities of what happened, more than just a shoot out. The sprinkler thing was made up, I mean, I’ve got to take some liberties. But a lot of it was inspired by the event more than it’s a factual retelling of it.

AD: It’s funny you mention Springsteen, because I did sort of think of “Nebraska,”  but not in a preachy way. There’s a plainspoken quality to the line “There’s just a meanness”  in this world,”   and I hear a lot that in “Southern Colorado Song,”  when you sing “Sometimes nowhere seems the only place to go.”

James Jackson Toth: Yeah —  he does that stuff really well. As a writer I live in his shadow. If I can sort of attain some of that “Nebraska”  vibe, I’ve succeeded.

AD: There’s a lot Neil Young in there, too. Not that you’re aping Young, but in that you take things sort of sidewise. I appreciate that in your records, it’s not coming from that worshipful Americana place. Everything is sort of askew. I guess that probably comes from those King Diamond records.

James Jackson Toth: [Laughs] Yeah, that background in metal is a blemish you can’t really deny.

AD: I remember reading something from Jason Molina of Magnolia Electric Company saying the same thing, about growing up with Sabbath records or John Darnielle from the Mountain Goats, and his fascination with death and black metal. There’s something about it that keeps your work from being that…

James Jackson Toth: That heartland sort of thing. Yeah, I think it’s indelible mark that it leaves, because it teaches you to question things at a very early age. My family never really forced me into anything. They taught self-reliance; I was never burdened by their religious beliefs or anything like that. They taught me very early to question things that a lot of people take for granted.

So for that reason punk, metal, and hip-hop, to a large extent, is good for kids in that way that it teaches you to think outside the box. Even if you don’t think that it’s demonstrative or instructive, I think in some ways it really is. I think that’s something you hear in Molina, or Darnielle, or my music that you don’t hear in, I dunno, the Gaslight Anthem or something.   words/ j woodbury