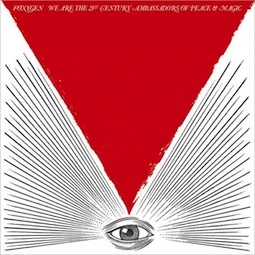 No one will accuse  Foxygen’s We Are The 21st Century Ambassadors of Peace and Magic of being a concept album. It’s as stylistically diverse, maddening and confident as the Take The Kids Off Broadway EP, yet feels ready to enter the primetime — a band confident that their set of skills will be accepted, or at least tolerated. This is in part thanks to the deft production of Richard Swift, whose hand truly feels like a contribution rather than a contraption. Sonically, the music is still confounding, still prone to fits of vibing followed by un-fettered freakouts. And with Foxygen there always seems to be a nod and a wink with every riff and turn. Sam France’s manic vocal delivery, something like a man alternating between 103 degree fever dreams and a case of the chills, meanders mercurially throughout the record, with multi-instrumentalist Jonathan Rado accentuating his most fanciful moments. And it’s this, Rado’s own ability to genre-hop moment-to-moment, that remains one of the bands hallmarks and is as defining as France’s howls of poetry.

Foxygen’s latest work continues to build atop the pop foundations sewn into each of their previous releases. Yet with 21st Century Ambassadors, the time has come to stop pitting their songs against past-genres and just allow the band to revel in the glammed-out bliss of “Shuggie”, alongside “San Francisco”‘s Velvety laze, and whatever “Oh Yeah” is smoking. A bouillabaisse this is.

Two previous songs get new treatments on 21st Century Ambassadors. First up is “No Destruction,” whose original form now feels like a demo if not for the fact that it stood so well on its own. The reworking adds to the jangly qualities of the tune, but where the original feels like France is delivering a feverish burst of emotions backed by his devilish and whirling cohorts, the new jam has him instead exuding the front-man confidence he often channels live, a simmering mix of suave and bombast. Everything is polished, every sound that each version shares feels smoother, mic’d right, and played until the right take emerged.

The same is true for title track, “We Are The 21st Century Ambassadors of Peace and Music.” It’s a stretch to call anything that sounds or reads like this “polished” but it’s certainly the updated version of its earlier, more primitive, brother. The original feels like a moment captured in time, France seems exhausted by the end, Rado hardly able to keep up with the changes he demands of himself. Now its like an eternal submission, the kind of de-camped Space Government-in-Exile brand of nonchalance the band cultivates — peaceful at one moment, on the war path the next.

This doesn’t mean anything is lost, nor does it mean there is a superiority to any phase of the bands evolution — but if somewhere down the line some future teenage-alien snobs wanna fight over versions of the wild stylistic swings of Foxygen’s career,  21st Century Ambassadors is fodder for the flames. That, and space drugs. words/ b kramer

Related: (Catching Up With ) Foxygen :: The Aquarium Drunkard Interview