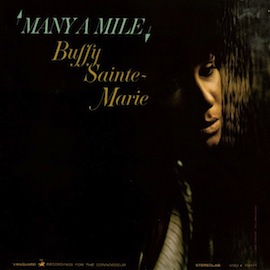 Comprised of now-iconic tracks like “Cod’ine,” “The Universal Soldier,” and “Now That the Buffalo’s Gone”, Buffy Sainte-Marie’s 1964 debut, It’s My Way!, first and foremost introduced the artist to the world as a songwriter. Her topical folk albums on Vanguard Records proved she was one of the more original folk revivalists as well an important Native American voice.

Sainte-Marie’s 1965 follow-up, Many a Mile, featured the original recording of “Until It’s Time for You to Go,” which became one of her most covered songs and a hit for both Elvis Presley and Neil Diamond. Although she never released it as a single, the track tends to overshadow the rest of the record heavy on covers and traditionals. However there are some phenomenal interpretations tucked into Sainte-Marie’s sophomore release that highlight the singer-songwriter’s mastery of the folk canon as well as the chilling beauty of her wild, ray-gun vibrato.

Take her rendition of “Lazarus.” She’s sings it a capella, and her twangy wails ring out in the negative space between verses. As the ballad progresses, slow sloppy handclaps burst into a magnificent echo, and she begins to elide the phrases, drawing out the ends of verses with quaking, high-frequency vocal tremolo. On “Come All Ye Fair and Tender Ladies,” she sings atop a buzzy mouth harp that drones and slowly drifts through various overtones. There’s a modal tendency to the melody that clouds up in ambiguity and uncertainty, never allowing the satisfaction of a proper, tonal resolution. The effect is woozy and meditative, perfectly situated amongst the stark arrangements of her first two albums. words/a spoto

2 thoughts on “Buffy Sainte-Marie :: Many A Mile”