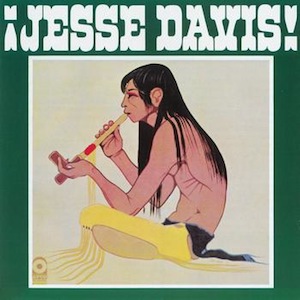 Backing Taj Mahal in The Rolling Stones’ Rock and Roll Circus, Jesse Ed Davis plays guitar like a stone cold badass. His face looks almost too at ease to be lucid and focused, yet his deliberate licks on the telecaster are perfectly understated and soulful. When the band drops out during “Ain’t That a Lot of Love,” Davis takes a coolly restrained solo that’s all punchy rock licks but the antithesis of gauche shredding. As he finishes with a climactic, wailing note, his facial expression barely hints at a smile of satisfaction. He’s a satisfying foil to Taj’s bombast. The Oklahoma born, Kiowa bred guitarist got his start playing with Conway Twitty, got famous playing with Taj, and racked up an impressive list of studio credits throughout his career. He was one of the most tasteful guitarists from that late ‘60s high period of electrified blues rock–not a rock star but a rock stylist.

His self-titled 1971 album is awash in celebrity talent comprised of who’s who cast of characters ranging from bonafide rock stars to fellow crack session players–Eric Clapton, Leon Russell, Gram Parsons, Merry Clayton and Clydie King all make appearances. While Davis’ songwriting may not jump out — at times coming across like a vehicle for the next jam — the ace ensemble captures an impressive, swampy, Muscle-Shoals vibe that at times recalls Dr. John’s early Night Tripper material or Link Wray’s “Shack” recordings.

And indeed Mac Rebbenack is credited with playing piano on Davis’ next solo LP, Ululu. Bassist Donald “Duck” Dunn is in the Ululu band too, and its sound is a bit tighter and more focused on Davis’ guitar playing. There are fewer originals and Davis shares a writing credit with Taj Mahal on “Farther On Down the Road (You Will Accompany Me),” but the highlight is his dusty take on Merle Haggard’s “White Line Fever.” Here, he stuffs a rag in the muffler of Haggard’s truck–it’s less pokey, a straight-ahead roadhouse rollick.   When he asks in the opening line “I wonder just what makes a man keep pushing on?” Davis’ ragged, untamed voice sounds desperate, a little frantic. Like his guitar style, Davis’ voice sounds soulfully low-key. It’s easy to imagine coming from mouth of that straight-faced performer in the Rock and Roll Circus. The song is short, sweet, and Davis’ trebly slide guitar is featured prominently throughout, and, really, that’s what we want to hear. words/a spoto