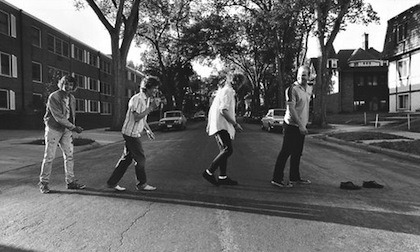 On February 18th, 1995, Bob Stinson, founding member and former lead guitarist of the Replacements, was found dead in his Minneapolis apartment. While at the time it was suspected to be an overdose, it was later determined that the years of substance abuse had simply worn his body out. He was 35.

Bob Stinson’s life is a key part of the story of the Replacements. He was the good-hearted, incendiary guitar player who powered the ‘Mats’ first five LPs with his chaotic, light speed guitar. The official story behind Stinson’s dismissal from the band in 1986 was always that his substance use had gotten out of control. (An excuse that still seems laughable considering the heroic intake by the other members of the band as well.) But in addition to being a musical force for the band’s sound, he also became a sometimes muse for Paul Westerberg’s songwriting.

Arguably the first time we truly see this is on the last record Stinson played on for the band, 1985’s Tim, and its opening track “Hold My Life.” It was Westerberg’s portrait of the artist as someone not quite capable of handling the responsibility of, well, living. “Hold my life until I’m ready to use it / hold my life because I just might lose it.” The song’s plaintive plea for support and a temporary reprieve – someday, I’ll be ready to live and do it right, but until then, would you hold my life for me? – seemed the perfect description of the ramshackle life of the man legendary for appearing naked (or in a tutu or whatever else might’ve been handy) on stage. One need almost go no further to understand why “Hold My Life” is Stinson in miniature than the anecdotal story of Stinson’s zen koan-like rejoinder to stress, no matter what day of the week it was: “Relax. It’s Tuesday.”

The penultimate track on Paul Westerberg’s 1996 solo record Eventually was written in memory of the then recently dead Stinson. The Rolling Stone obituary for Stinson had quoted Westerberg as saying “it hurts as much as if we weren’t expecting it…it was a sad end to a sad life.” But there’s more nuance to “Good Day” than in Westerberg’s somewhat glib quote. “Yes, a good day is any day that you’re alive,” Westerberg sings gently in the song’s chorus, a dual reference to reflecting on his own survival through substance issues and the sadness of Stinson’s passing. But in a lovely bit of bookending, Westerberg calls back to the very song that predicted the outcome. “Sing along, hold my life,” he painfully croons through the song’s first two verses before the last line into the final chorus where, leading into a few, quiet, quick piano runs and then a brief moment of silence, he sings “hold my life one last time.” It feels like you can almost hear Westerberg saying: Bobby, I wish I could’ve held it for you still. words/ j neas

5 thoughts on “Sevens :: The Replacements – Hold My Life / Good Day”