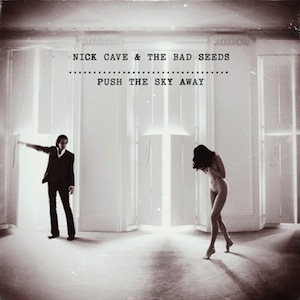 It’s nothing new for Nick Cave to sound bummed out. Over his thirty-year career, the chief Bad Seed has groped his way around every dark corner he can find. Even at his hip-shakin’ freest–2008’s Dig, Lazarus, Dig!!!, his last record with the Bad Seeds–he sounds like he’s grabbing his crotch in the general direction of death and decay more than he is lauding life and good fortune. No matter. Cave’s particular gift has always been his ability to make darkness compelling, to render it real and horrible in a way that few others can. It’s that ability and his willingness to use it that give his most reverent work its integrity; you can believe the man who sang “Death is Not the End” or “There is a Kingdom” because he’s the same guy who wrote “Tupelo” and “Saint Huck.” And in his most heart-wrenching work–“The Mercy Seat,” let’s say, or “Darker With the Day,”–he’s yelping from the feeling of being stretched between two poles, but with eyes open wide enough to record exactly what he sees.

So it’s not a surprise that Push the Sky Away is a document of deep and disturbing dis-ease. What is surprising is how little Cave seems to want to tell us about it. It’s an album of vague forebodings narrated by a largely disenchanted singer. This isn’t necessarily a problem; the Bad Seeds have traded on their ability to conjure anonymous storms for decades now, and it’s only fitting that their singer would eventually join them. But it is an adjustment, and a bit of a jarring one. Anyone hoping to hear about trips spent guruing up and down “Jubilee Street” are surely disappointed (and, okay, they can call upon the author to explain).

Cave’s language here is sparse, and, unburdened by the weight of a paragraph-long lyric sheet, his voice seems to drift away. He floats in and out of the songs, ceding territory to the band. The Bad Seeds’ capacity for subtlety has always been underrated, but here they take what is the closest thing to center stage, painting horror in miniature. Warren Ellis threads his hoarse violin lines through a cobblestoned bassline in “Water’s Edge,” while steel-brushed guitars scrape away veneer. Cave reads like Gogol in a thunderstorm, telling some tale about girls from the Capitol and the ways they tempt the local boys. “The chill of love is coming down,” he sings. That same chill frostbit 2001’s No More Shall We Part, Cave’s masterpiece of marital lament, but where twelve years ago there was a kind of charm to the game of love, here the entire thing sounds like an elaborate ruse or, worse, an unfeeling transaction.

Which isn’t to say that Push the Sky Away is cold, or that Cave is somehow ineffective. He’s just not the swaggering Cave, Nick the Stripper with the taped-on mustache, nor is he the broken stallion in love with his master. You can hear the difference in “Mermaids.” His singer sits at the edge of the sea, watching “the mermaids sun themselves out on the rocks/They are beyond our touch/I watch and watch.” Processed guitar slides around behind him as he charts a course through late-life resignation. “All the ones who come/All the ones who go/Down to the water,” he sings in a voice that’s painfully sincere. He’s a different Nick Cave here: He’s old. It’s almost embarrassing how sad it feels to realize this.

“Mermaids” is the closest Cave comes to speaking his blues in plain terms. Nerves and anxiety come steaming off of this album, so powerful you can practically feel the energy against your hands. But you can barely see it through the fog. For a sparse forty-three minutes, you can feel Nick Cave push the sky away. With it go light and clarity, and so we end up getting pushed away, too, stuck with the view from the other side of the clouds. Maybe we get a better view of him this way; maybe we can only see him at the water’s edge from a certain distance. But he sounds lonely, and resigned to a longing that he knows won’t be fulfilled. It’s a kind of painlessness, I guess, but it’s hard not to miss the sound of tendons popping as they’re pulled between two extremes. words/ m garner