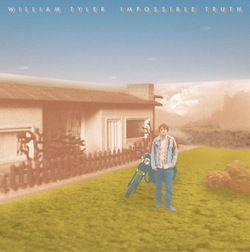 While Impossible Truth may only be William Tyler’s second solo album, chances are you’re familar this Nashville-based guitarist. For more than a decade, he’s been the go-to six-string stylist for such heavyweights as Lambchop and Silver Jews. Despite (or perhaps as a result of?) having studied under Kurt Wagner and David Berman, two of the best lyricists in all of indie rock-dom, Tyler’s recordings under his own name are wholly instrumental affairs. That’s just fine, though — his guitar speaks volumes. It’s tempting to slot Impossible Truth in the John Fahey/Takoma School niche thanks to Tyler’s deft finger picking certainly. But where so many of Fahey’s disciples are doggedly minimalist, Tyler’s vision is positively technicolor, layering gorgeous sounds — moaning pedal steel, triumphant brass sections, reverb-laden electric twelve-strings and more — over his majestic compositions. A close comparison might be Jim O’Rourke’s classic Bad Timing, which applied a similarly maximal approach to the Takoma School. But Tyler’s vibe is much warmer and melodic than the ever-cerebral O’Rourke — in fact, if there’s anything to complain about here, it’s that Tyler’s melodies verge on being too pretty. Then again, he closes the album with a feedback/drum machine freakout, so no one will accuse him of lacking edge. words/ t wilcox