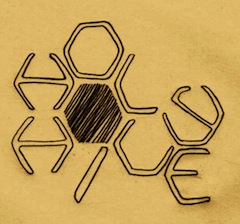 “We can do that one more time” someone faintly says in final third of “Blinded.” So is the imprecise nature of the entire Holy Hive EP. They’d be demos if there were anything to add; instead, any impreciseness is as welcome an addition as any of its inherent elements.

Joseph Hein doesn’t mince words. “Don’t abide by me, given my mind and the way I see.” He apologizes, but he knows his heart was in the right place. Now, it’s shards have been flung about — with only himself to blame for the shoveling. It’s a cathartic  task: letting the badness go, never letting that bad light in.   Nor does he mince arrangements, articulated as well as any Dirty Projectors or Matthew E. White entry, but economical in scope and recorded precision. Hein’s guitar is as comfortable being gently strummed as it is furiously bashed. Woodwinds drift in and out like a cool winter breeze. A drum rises and ebbs in the mix; a piano serves as it rhythmic partner. Nor do his compadres mince their harmonies. Accentuating the song effortlessly, they punctuate Hein’s poetic musings on the power of light, on the powerful difference between the artificial and the night. Pouncing on his words, on strings, on strums, ending the entire affair on a rising crescendo of sheer triumph — “in a way my soul has been saved by the sky.”   words/ b kramer