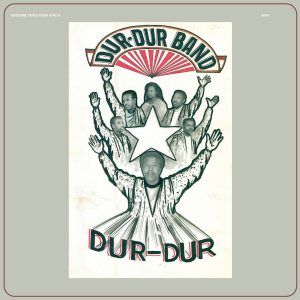 Dur Dur Band was one of Somalia’s last great party bands, a group that, at its peak powers, was 12 members strong and performed a high energy tincture of cross-cultural funk. The Horn of Africa’s sound filtered through the spritely, synthy pop music of the ’80s, Dur Dur’s dance music was made to bump in the hotels and soccer stadiums that played host to Mogadishu’s music scene. The band grew very popular during the final years of communist dictator Mohamed Siad Barre‘s reign, an unlikely period of imposed stability in a city that since has been the site of much violence and religious extremism. The 1991 civil war flung the Dur Dur musicians into exile, cutting off the band in its prime.

Judging by the many VHS scraps of Dur Dur performances on YouTube, the band was a formidable revue in its heyday, and they released many cassette albums during the ’80s and early ’90s, most of which have become quite difficult to come by. However the music has survived decades of unrest in Somalia, and the fantastic Awesome Tapes from Africa recently made a proper, digital-age reissue of Dur Dur Band’s Volume 5. It’s the group’s best album, according to the obsessive collector’s opinion of ATFA’s Brian Shimkovitz. Recorded in 1987 at the state-run Radio Mogadishu, Volume 5 makes a precious document of a long lost music scene but also is an engaging listen for those who enjoy reveling in the unique sound’s disparate influences. Four vocalists sing memorable, narrative melodies through an intense echo effect, and rea l instrument sounds blur into the synths and mechanized bounce of the percussion. ATFA uploads a diverse collection of African music, but it’s the cassette tape fidelity that provides the backbone for the blog/label’s aesthetic. Shimkovitz had to source from the original cassette tape for this reissue, preserving the original medium’s mystique in which the distinct fidelity gives the crisp, propulsive beats a cool, muted texture.

Amidst the press surrounding this reissue, The Columbus Dispatch did some excellent, local reporting that catches up with two of Dur Dur’s four singers, Abdinur Daljir and his wife Sahra Dawo–Dur Dur’s one female voice and standout performer. The couple runs a shop in a Somali shopping center in Columbus, and the where-are-they-now style article points out that Daljir and Dawo’s celebrity has gone mostly unnoticed in Ohio outside of the small Somali ex-pat community. While Daljir admits “I used to be popular, ” the Somali barber in the shop next door is quoted saying, “back in the day, they were as big as Michael Jackson.” Hear Dawo sing on “Garsore Waa Ilaah,” a cascade groove of fat-backed syncopation. words/a spoto