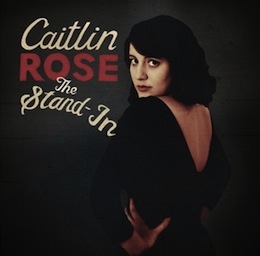 It’s a hard lesson to realize what terrible things you’re capable of doing. We like to think the best of ourselves, but there are relationships that send us into dark places within ourselves in word and deed. “I Was Cruel” from Caitlin Rose’s second LP The Stand-In takes a classic country trope – the destructive relationship – and opens it up for examination so that the blacks and whites all become a lot greyer.

The best practitioners of alt-country in the past 25 years have taken the influence of country’s golden age and given it a shot of post-modern lyrical examination. Where classic country’s bad relationship songs would usually mull over how the narrator was treated wrong or how they were the one who just couldn’t settle down or play nice, anyone who has ever been in a serious relationship knows that things are never as simple as that. “I would’ve warned you if I’d known,” Rose sings as the chorus gently slides in, “but I never knew I was cruel / No, I never knew I was cruel / Baby ’til I..met you.” While the first verse seems to place the blame at the feet of the silent partner (“You throw dirt in my face / then you push me over / push me over the line.”), the chorus turns its aim inward and finds our narrator looking hard at him/herself. It’s a sharp turn in a song packed with them that manages to make space for some tremendously classic spots in the music as well. The pedal steel and the key change at the end of the bridge are huge parts of what make this song sound as stellar as it does.

Rose is a tremendous songwriter, but “I Was Cruel” is one of the few songs on the album that she didn’t have a hand in writing. The song was written by members of the band the Deep Vibration whose guitar player, Jeremy Fetzer, also plays in Rose’s band. I talked with Rose prior to a show here in North Carolina in April and asked her what it took for someone else’s work to grab her so much that she felt she needed to record it herself.

“It’s an immediate feeling. I used to do it a lot more. I’d hear a song I really liked and would immediately go ‘we have to play this song live!’ And I would do that way too often. But this was a song I sang background on when [the Deep Vibration] did their record two years ago. And I just said ‘I have to record it.’ And a couple of years later, we recorded it. For me, there is a distinct difference between ‘oh, I like that song’ and ‘if I don’t record that, I’m going to explode.’ With ‘I Was Cruel,’ it was a sentiment I haven’t heard much in songs. It’s very honest and it’s kind of ugly. It’s an ugly feeling. But it’s one you can embrace. It’s a very exploratory song.”

The sex of the song’s narrator remains hidden until its somber, soft finish when Rose sings that “I’m a selfish man / with my head in my hands.” I asked Rose if she had been tempted to change the sex of the narrator in singing it.

“Well, Linda Ronstadt cut a ton of songs in the 70s where she kept the male pronouns, and everybody always really dug it, and I’ve always really dug it. A good song is a good song. Changing lyrics can be a very scary thing for me because I don’t want to compromise someone’s vision for a song, especially if it’s one I love and respect. And for some reason one of the best feelings in a set is singing ‘I’m a selfish man,’ and I don’t know why. But even the male pronoun has so much to do with the sentiment of the song for me because everyone has their anima and animus and I kind of embrace that male side of myself. So, I don’t think it needed to be changed. And it wouldn’t have sounded as good. That’s the most important part – if it doesn’t sound good, don’t do it.” words/ j neas