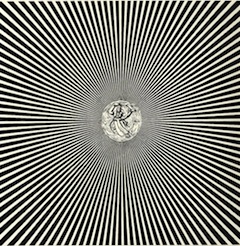 Kendra Smith wasn’t kidding around when she called her 1994 solo album Five Ways Of Disappearing. Aside from some very low key performances in the late 90s, she’s pretty much vanished from the music scene. Or any other scene you’d care to name. Smith is rarely mentioned these days, which is understandable; aside from her work with the Days Of Wine And Roses-era Dream Syndicate, most of her music is out of print. Which is a shame, since that includes two fantastic Opal LPs made in close collaboration with David Roback (who would later take a version of Opal’s dreamy sound to the masses with Mazzy Star) and the classic Rainy Day collection. But maybe Smith finds obscurity appealing.

Perhaps her most obscure release is the 1992 mini LP, curiously entitled Kendra Smith Presents The Guild of Temporal Adventurers, a sparklingly psychedelic release that places Smith’s dark, Nico-esque voices amidst a glorious swirl of shimmering guitars and keyboards. “The Only Stars Are In Your Eyes” takes its melodic cues from the VU’s “I’ll Be Your Mirror” but lyrically leans more towards “Venus In Furs”: “The moon descends into the night / We press together, kiss and bite.” Another highlight finds Smith and her Guild tackling the Can classic “She Brings The Rain,” her cool vocals fitting the psych jazz vibe of the song like a glove. Will Kendra ever come back? The odds seem slim. But the music she’s left behind deserves to be rediscovered. words/ t wilcox

6 thoughts on “Kendra Smith Presents The Guild of Temporal Adventurers”