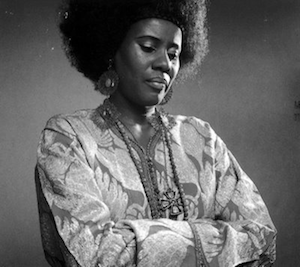 It’s been noted that 1976’s “Transfiguration” is a culmination, and a sort of completion of the body of work Alice Coltrane had been building since 1967. The title track from the eponymous live album (not released until 1978) was purposely titled to mark the beginning of Coltrane’s spiritual based compositional phase where she strictly composed Hindu inspired chants and meditation music. Strong and entrancing, “Transfiguration” is perhaps most importantly a free jazz piece that contains absolutely no bells and whistles, and no Hare Krishna title or lyrics. It’s just Coltrane on piano and organ, Reggie Workman on bass and Roy Haynes on drums, giving the audience at UCLA in Los Angeles an opportunity to hear what Coltrane was naturally working with.

This subtly bold expression of the transition of Coltrane’s musical identity and composition style allows a last taste, or rather a sending off from her traditional experimental and improvisational genius, into a more transcendental compositional style. “Transfiguration” is her, leaving a satisfying musical remnant of a season of art that was never to be duplicated again, since the definition of transfiguration is complete change of form or appearance into a more beautiful or spiritual state. This one is for the enthusiasts who don’t want chocolate in their peanut butter. It’s as if she respectfully left something for the people who she knew would not spiritually ascend into the clouds with her. She knew that it was end of the road for her and some of her loyal, purist followers, and she did a brilliant job of jamming her heart out and, in the process, creating a flawless piece of work. words/ j elizabeth