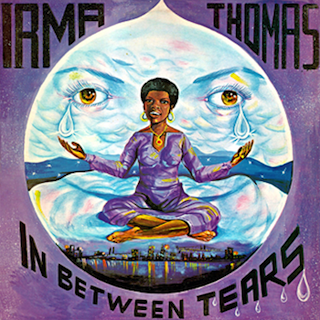 Jerry “Swamp Dogg” Williams isn’t one to mince words — see the AD interview with the man for further proof — so when he says that the New Orleans-born Irma Thomas is “just as good or better” as Aretha Franklin, Etta James, Alicia Keys, Adele and “a host of others,” it’s worth paying attention. Dogg’s lone full-length collaboration with Thomas, In Between Tears, bears his assertion out. The record was recorded as something of a comeback effort, following a string of singles and Thomas’ sabbatical to the West Coast. When she came back to the South, it was with a mighty wind. The album’s recently been re-pressed by Alive! Records, alongside the label’s third entry in its Swamp Dogg reissue catalog, the exceptional Gag a Maggot.

Williams’ stamp is easily discernible on In Between Tears. He’s responsible for the bulk of the songwriting and his expert production (overseeing players like guitarist Jesse Carr, bassist Robert Popwell, organist Paul Hornsby, drummer “Squirm,” horn and string sections, and guitar legend Duane Allman who “wandered into the studio and picked up a guitar” for a few early sessions, not long before his death in 1971) provides a firm foundation for Thomas’ voice to soar over. The combination of Thomas’ vocals and Williams’ off-kilter approach is magic. There are moments of pure sonic wackiness — the waterlogged guitars of “These Four Walls,” the vamping spoken word rap of “Coming From Behind,” the stark strut of bonus track “We Won’t Be in Your Way Anymore” — and there’s a distinctly “Doggian” lyrical theme: most of the songs concern the ins-and-outs of infidelity, sung from alternating viewpoints, by the cheated on and the cheater herself.

Originally brought in to record Thomas for indie label Canyon Records, Williams was so keen on the resulting recordings with Thomas that he bought them from Canyon owner Wally Roker after the label folded. He issued In Between Tears on his own label, Fungus Records. “I was somewhat smitten with her but I couldn’t wear her down,” Williams writes in the liner notes of Alive’s remastered edition. “So I commenced to do what I was hired to do, produce a hit record and cut out the Casanova bullshit.”

The liner notes go to further describe the general harassment of Thomas in the studio, like the time Popwell drilled a whole in the ladies bathroom wall so he and the band could view Thomas’ “wonderfulness.” So it’s no surprise that Thomas “didn’t remember” Williams when he last saw her in New Orleans (he estimates it was about 25 years ago), or that Thomas wasn’t interested in doing interviews regarding the new edition of album. But the work stands for itself, a groovy, heavy slab of soul that benefits not only from its producer’s lewd charm but also the stately power of her “wonderfulness.” words/ j woodbury

3 thoughts on “Irma Thomas :: In Between Tears (Reissue)”