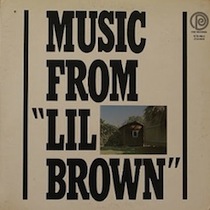 Known to J Dilla disciples for his sampling of “Light My Fire” on Donuts, it was Lil Brown’s title and artwork – an obvious nod to Music From Big Pink – that initially caught my ear a few years back. I suppose all roads do lead to Rome.

Aside from the title nod, “Lil Brown” is a far cry from Danko/Manuel. In lieu of the fabled West Saugerties, NY rental in which the Band hashed out their opus, here we’re presented with a modest brown garage tucked away in the Baldwin Hills neighborhood of south Los Angeles. It was in this garage the members of Africa both conceived and laid down what would constitute their sole (commercially released) album recorded under the collective handle of ‘Africa’. Comprised of seasoned L.A. vocal group veterans, doo-wop and otherwise, Africa’s m.o. wavered between interpretations of, then, contemporary rock covers to soul and funk originals. Incorporating and exploring a wide swath of styles and arrangements (from Latin rhythms and funky hoodoo to traditional R&B and soul flourishes) the album at times feels geographically unplaceable — which is exactly part of it’s enduring charm. Produced by Lou Adler, 1968.