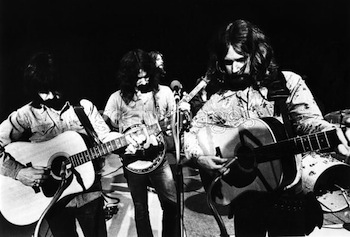 “The more you drink, the better you’re gonna like us,” Roger McGuinn tells the crowd of Angelenos early on during this set. “And the more we drink, the better we’re gonna like you…” And indeed, this is a well-lubricated performance, teetering occasionally on the edge of disaster, but generally keeping it together. Barely. If you’re looking for the Byrds at their tightest during the group’s latter days, take a listen to Untitled or Live at the Royal Albert Hall. But if you want the Byrds at their loosest, rowdiest and most fun, you’re in the right place.

Of course, this was a very different band than the one that rocketed to fame on the Sunset Strip in the mid 60s. By 1970, McGuinn was the only original Byrd remaining, having watched Clark, Crosby, Hillman and Parsons all leave the nest. But what the band lost in star power they gained in onstage prowess, thanks to the buoyant, country funk rhythm section of Skip Battin and Gene Parsons (no relation to Gram) and, most of all, the incredible lead guitar of Clarence White. As though Jimi Hendrix had been schooled on classic country rather than R&B, White was one of those players who couldn’t hit a wrong note if he tried. He’s the unstoppable engine that drives this performance. whether picking out the perky intro to “You Ain’t Going Nowhere” like a bona fide Nashville cat, achieving psychedelic liftoff during “Well Come Back Home”‘s instrumental break, or dancing nimbly around McGuinn’s iconic 12-string on “Eight Miles High.” When he was killed senselessly by a drunk driver a few years later, we lost one of the greats. words/ t wilcox