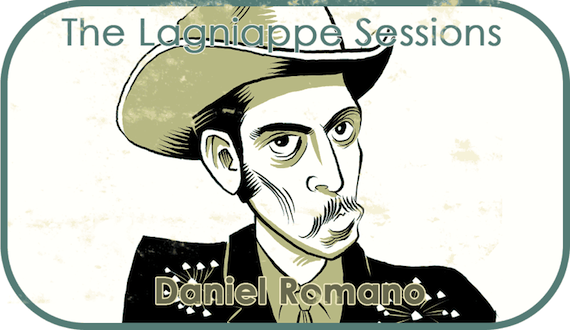 The music world lost a giant in April: George Jones, White Lightening himself — the Possum. For this installment of The Lagniappe Sessions our favorite Canadian country crooner, Daniel Romano, pays tribute to the legend covering “I Can Still See Him In Your Eyes” and “There’s The Door”. Jones’ body may have been laid to rest at Woodlawn Cemetery in Nashville, but his firebolt spirit is less easily contained. Romano, in his own words, below.

Daniel Romano :: I Can Still See Him In Your Eyes (George Jones)

This song has an almost  identical melody to everyone’s favourite Twitty song “Hello Darlin”.   It  is the title track on the possums 1973 record. The song  is  immediately followed by “Hello Darlin'” which was an  interesting move to say the least.. Unlike “Hello Darlin'”, this song  is much more stark and to the point, evoking the dark feelings and desperation that go hand  in hand with jealousy. The man from the past remaining  in the mind of your lover…what could be worse.

Half devastating, half optimistic, this song  is mostly good for  its amazing vocal delivery by Jones. When the chorus hits you could swear he’s crying. The front half  is a man caught  in the headlights of truth and being turned away. The second, a self-discovery and a thought of a chance at another chance. I don’t know what  it says about me, but I prefer the front half.

5 thoughts on “The Lagniappe Sessions :: Daniel Romano on George Jones”