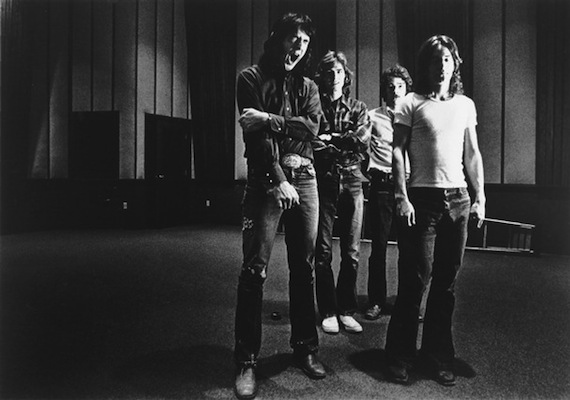 Aquarium Drunkard: What’s your reaction to Nothing Can Hurt Me? Is it emotionally draining, or like revisiting old friends?

Jody Stephens: It is like visiting old friends. There are certainly really sad moments, because Carole Manning is there and she’s passed away. Jim Dickinson’s no longer here. Alex {Chilton} and Andy {Hummel} are gone. That’s really the tragedy of Big Star, that Chris {Bell}, Alex and Andy are gone. Alex and Andy went fairly close together. Outside of that, it’s nothing but a great story for me. It’s cool that all these people cared and participated. Danielle McCarthy had the idea and the passion to pursue it. Everyone involved did a great job with it. It took a long time. It was six years in the making, so you have to have that passion. It’s cool that people care.

AD: I thought the film was a perfect tribute, and very well done. Did you have any hesitation when you were first approached about the project?

Jody Stephens: There was some, with John Fry in particular. As you know, John was Big Star’s mentor and the Ardent Studios owner. Ardent was where we would gather and do our little late night recordings. Danielle called John, and she came with great referrals. She just had the right spirit and passion for it. She won John Fry over pretty quickly, and because of that, won me over too.

AD: One thing the documentary really shows is that Big Star might be the original critics’ band. What does that term mean to you? Do you have any negative associations with it?

Jody Stephens: No, I don’t. They were our only audience at the time. John King, who was the sort-of publicist of Ardent at the time, made sure the records got into the hands of the writers, and organized that rock writers convention in 1973. They were our only audience, and we didn’t have a proper audience before that convention. We were onstage, me, Alex and Andy at the convention, and we suddenly got this Big Star audience. It was all these rock writers who knew the songs. That was literally our first real audience. Then people wrote about it, and that’s kind of why we’re sitting here talking today. They continued to write about us, and then musicians started talking about us. It was really kind of word-of-mouth over 18, 20 years. I’m grateful for that.

AD: It’s such a shame that you were critical darlings, but you never really got to go on the road and bring the live show to a wider audience.

Jody Stephens: We never had a proper booking agent, or a proper manager. Nobody was into us, so we’d do a few dates, like Max’s Kansas City in New York, which was fun. It was kind of the pinnacle of rock and roll clubs. It only holds maybe 125 people. There was a pretty small stage that you’d share with somebody else. We shared a night with The Butts Band, which was what was left of The Doors when Jim Morrison died. One night we traded sets with Ed Begley Jr., who was a stand-up comic. That was a really good time. Somebody asked Ed Begley Jr. about it, and he didn’t remember it. We opened for Badfinger in Boston. We only did a handful of shows.

AD: The way that I view a critics’ band is that it’s too smart for the general public. If PR, management and distribution had been in place for the first record, do you think you could have been embraced by a mass audience?

Jody Stephens: I don’t know. I think that we all hoped that we would. Chris, maybe more so than any of us. Chris’ sole focal point was #1 Record; getting it right and all the hours he put into it. I got to tell you, the record wasn’t like everything else that was going on at the time. Music had gotten so sophisticated. I’m a huge Led Zeppelin fan, but they were out of reach. There was Yes, and all these bands with amazing players. The Beatles had broken up in ’70, but Sgt. Pepper’s was out of reach. But I don’t know. I thought we had made some great music together, and that was the success that I was proud to take away from it, whether it succeeded commercially or not. It would have been nice, but it was ok if it didn’t. I was 18, and it was a long shot anyway.

AD: In the documentary, and in my dealings with you, you seem like such an amiable, easy-going guy. Were you the peacemaker in the band?

Jody Stephens: Things never really got heated in the band, except maybe a couple of times. One time we were practicing in the living room at Alex’s parents’ house. Chris was riding Andy a little bit, and Andy had had enough of it. He put his bass down and was leaving to rehearse the next day. As Andy was walking out the door, Chris made some barbed comment. Andy whipped around, stomped back and hit Chris. Knocked him a good one. I can still picture Chris’ glasses askew on his face, with this shocked look. Andy walked out and Chris picked up Andy’s Thunderbird bass and broke it into three pieces. Then Andy found out Chris was visiting a girl named Linda Schaffer, and Andy got into Chris’ car and poked holes in Chris’ Yamaha acoustic. It’s not like I was trying to be the mediator there. It was all just unfolding. Outside of Chris breaking Andy’s bass, I didn’t know about the guitar until later. Andy wound up giving me that guitar, and I still have it. It happened at the right time. Alex had taught me some chords, and I wrote “For You” on that guitar. Alex said to a publicist once, “I’m a publicist’s nightmare.” So it was kind of up to me to be the ambassador for the band.

AD: What’s your impression of the music industry today? ADD seems to be killing the LP.

Jody Stephens: There’s a lot of great music out there in album format. It’s a lot tougher to make a living at it, because more people are sharing music without paying for it. It’s harder to get someone’s attention, because it’s so easy to record music now. You can do it on a laptop and put it on the internet easily. In one sense it’s great for musicians, but there’s a lot of people just doing it for the fame, without the passion and without any serious intent. When we were playing, or when I was recording with my brother, we had to save our money and go to Sonic to record. Sonic was owned by Roland Janes, who’s a pretty legendary guitarist who played with Jerry Lee Lewis. You had to make that effort to record. Instead of there being a thousand bands, now there’s 30-40 thousand.

AD: I’m a big Golden Smog fan, which you were a part of. What was that creative process like? Were there any clashing egos?

Jody Stephens: Absolutely not. There was no clash of egos. It was like joining a cool Boy Scout troop. It was a side project for everyone, and it was fascinating to be in a recording session with Golden Smog because there was like 6 or 7 people. The way people would self-edit in a recording session, someone might step back if we didn’t need a third guitar, and that interplay was really cool. Also I had Jeff {Tweedy}, Danny {Murphy} and Gary {Louris} all telling me to write a song. It really is a band thing, and in January of ’98 I went home and was watching the Olympics. It was figure skating or something, and this fear of failing or literal falling hit me. I sat down and wrote the lyrics to “Fear Of Falling” and gave them to Gary and Jeff and they finished it. They were very inclusive and the tours I did with them were such good fun.

AD: Do you recall the first time you heard The Replacements’ “Alex Chilton?” Did you know beforehand they were working on the track, or was it a surprise?

Jody Stephens: I started back at Ardent Studios on the business side of things in January of 1987. Jim Dickinson was in Studio B with The Replacements recording the Pleased to Meet Me record. That’s when I heard about it. I guess The Replacements had worked with Alex a little bit, and Peter Jesperson was kind of producing them. That’s when I first heard it, and when I heard the record I was blown away.

Jody Stephens: Aside from spending it with my wife, probably playing music. This right here is a pretty great day. Just sitting here and talking to folks about Big Star, and music and stuff. words/ drew fortune

7 thoughts on “Catching Up With Jody Stephens: The AD Interview”