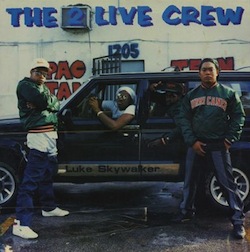 The First Amendment to the United States Constitution is one of the Bill of Rights’ most debated and sacrosanct amendments. In defining freedom of speech, controversy arises when the speech involved is of questionable taste: i.e. hate speech, “obscenity,” pornography. Despite repeated attacks by those who feel that particular acts of speech are detrimental to society, the courts and the people have largely stood by the idea of a broad interpretation of the amendment. As Edward Norton (portraying Larry Flynt’s lawyer, Alan Isaacman) argues in front of a jury in The People vs. Larry Flynt, using the slippery-slope argument, “if we start throwing up walls against what some of us think is obscene, we may very well wake up one morning and realize that walls have been thrown up in all kinds of places that we never expected.” Slippery slopes can be dangerous rhetorical ground when it comes to restricting one’s rights (see Rick Santorum’s infamous gay marriage-to-“man on dog” quote), but when it comes to trying to preserve freedoms, it stands much more firm.

This type of case is what the members of the Miami rap outfit 2 Live Crew faced over the sales of their 1989 platinum album As Nasty As They Wanna Be. If you’ve ever heard an unedited 2 Live Crew song, then you probably know why it ran afoul of those with less prurient interests. The album’s lyrics can charitably be described as intensely sexual and highly objectifying toward women. When Broward County sheriff Nick Navarro warned local record stores that they could be prosecuted for selling obscenity if they sold the album, the band filed suit against the sheriff. But a U.S. Circuit Court judge classified the album as obscenity and made it illegal to sell. Two days later, a store clerk was arrested for selling a copy to an undercover police officer and not long after that, members of the group were arrested for performing songs from the album live at an adults-only concert.

But those two arrests worked out for the defense; the band was acquitted and the store clerk released on appeal. In 1992 the United States Court of Appeals for the 11th District overturned the Circuit Court’s ruling and the Supreme Court refused to hear Broward County’s appeal. All of the restrictions on the record were dropped.

In 1990, in the midst of all the legal battles, 2 Live Crew released the album Banned in the U.S.A., the title track of which became their second Top 40 single. Where 2 Live Crew had been known to rather blatantly lift samples from well-known songs in the past, Bruce Springsteen gave the band his express permission to sample his “Born in the U.S.A.” for the track. The result — which mashes up snippets of news show discussions, quotes from band members and actual rap verses with a prototypical Miami bass beat — is a battle cry against censorship that feels that much more vigorous atop Springsteen’s powerful anthem about American disenchantment. An important milestone in the history of the First Amendment and the arts in general. words/ j neas