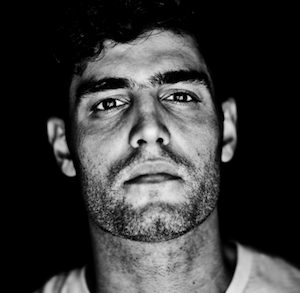 Last year, Daughn Gibson (née Josh Martin) debuted All Hell, a mysterious record by a deep-voiced, monikered singer that unfolds in an arresting whirl of loops and twang. The songs on All Hell are moody and disorienting in that the music is culled from a handful of disparate styles and sounds. Propulsive electronica and country & western flourishes are the most obvious sonic guideposts but also hint at musical contradiction: new/old, city/country, experimental/traditional, computer generated/acoustically plucked.

Gibson’s follow-up recently came out on Sub-Pop and it’s called Me Moan. An excellent record, Me Moan builds on Gibson’s haunting mystique both musically and thematically. Grotesque stories from seedy bars and suffocating small towns are set to dark, throbbing beats, illuminated as if by a honky-tonk’s neon rainbow, glowing on a dark night. The singer’s camp describes the music as “country-noir,” but noir-ish of what? Sure, Gibson’s music is noir, but a noir that is as nebulous as it is evocative. A song like “Pisgee Nest,” based on the story of a state-trooper’s daughter pimped out to a small, Pennsylvanian mountain town, suggests the grisly, sensationalized realism of a Dateline scandal special. The most widely circulated of Gibson’s biographical details would seem to authenticate his connection to the grittiness on display in his music. He came from a small town in Pennsylvania coal country, found music through playing punk and hardcore, and drove trucks across the country, the working-class manifestation of Americana road fantasies.

Me Moan’s guttural title is quite potent–”moan” being an uncontrollable, visceral outburst–considering how Gibson’s maverick style sounds so rich and unafraid. AD had the pleasure of chatting with Gibson over the phone about the altered states, the mysterious, the alien, and Me Moan.

Aquarium Drunkard: What was it like the second time around? What was different?

Daughn Gibson: It was a lot harder. It was a lot of fun, it was very cathartic, and when I turned it in in February I was completely exhausted.

AD: Did you do it all by yourself or did you have people helping you or working with you in some way?

Daughn Gibson: I’d say a good two-thirds of it I laid the groundwork for at home. And then I brought it to a studio in Chicago with my friend Benjamin Balcom and we kind of just parsed through and subtracted stuff, added stuff, and made it come alive a little more.

AD: In most interviews and features on you, the word “country” comes up. I get that Nashville isn’t calling you up to play at the Opry, but do you feel like you have something to do with country music as a genre, at least figuratively-speaking?

Daughn Gibson: I think moreso than any other genre or any other personality of music, I think I definitely do. And only because I can relate to the stories more than what’s typical of rock or hip hop. When I’m writing, it’s not completely natural for me to write country music, and mostly because I came up listening to punk and hardcore and stuff and playing in slower metal bands. But it definitely, when I’m finished with a song, it feels so good to have gone through the process of it and add a backdrop to lyrics. I guess that’s the challenge for me in every song.

AD: The lyrics come first for you?

Daughn Gibson:  Yeah… shading a song with lyrics and making sure that they’re compatible. For me, it’s more comforting for me to do that with country music. I mean, I love it… I listen to it more than anything else, so at this point it’s just what I do.

AD: You’ve remarked before that Kenney Chesney’s music made you cry… what modern country songs or artists that you are particularly drawn to?

Daughn Gibson: There are now. I know when I first started listening to modern country radio, I didn’t know who these people were, and I didn’t find it necessary to go figure it out. Then over time you kind of dig deeper into the history of it and start pulling up the older ladies and gents that made country “good.” I know Alison Krauss was one of the first “country” artists, so to speak, that I heard that just took me through the most ridiculous emotional ride. And she still does. Very heart-rendering songs and the way she sings just completely brings it home for me. Her talent is otherworldly… Any artist should aspire to be the person they look up to the most. I will never hit that echelon of talent, but it’s nice to have in the background of things you love, you know?

Daughn Gibson: In my mind, the pedal steel or the lapsteel/dobro has always been the most alien sounding instrument. It’s funny for me that it’s also super traditional. I often wonder how it made its way into such a conservative form of music because it’s still so strange. It’s strange to watch a country band play and have a pedal steel in the background–it’s the one instrument that’s crying all the time. Just about all of the pedal steel or lap steel stuff on the record was done in the studio in Chicago without knowing what it would be like. It was a matter of hiring a guy to come in to do it and then seeing what happens. We’d never had a melody planned out it was just kinda like, “hey, let’s try this, throw this on there.” Most of the time it ended up giving the song, to me, a new emotional depth.

AD: What can you tell me about the album cover?

Daughn Gibson: The album cover was shot at a more or less abandoned church up in coal country Pennsylvania, which is the center east of the state, the anthracite region. And I wanted it really to be like a person, more or less an uncivilized person who had no way to channel guilty feelings, feelings of remorse, and they kind of were just discovering this institution or religion or this cult for the first time, and they don’t know how else to profess their sin than by getting totally naked and flipping out.

AD: There’s a primitivism in that image… looks like they’re speaking-in-tongues.

Daughn Gibson: Yeah, without any prompting or guidepost on how to become religiously unhinged, that was what I was trying to get at.

AD: What weighs the most on your impressions of religion, the institution or establishment of “going to church” or the cultish aspect to faith?

Daughn Gibson:  I guess it has always been more of an interest in the cult of it… in how humans get wrapped up in the absolutism and how it informs their decisions in their lives. I grew up Catholic, so there’s certainly a thread of appreciation–at least, decorative appreciation or aesthetic appreciation, even if it doesn’t inform my morals at all. I try not to tie that in so much, I’m not trying to do a reimagining of some Biblical passage, but I like the mystery of it. And not necessarily the question of faith so much as just the absurdity of it and how powerful such an absurd thing can be.

AD: To me, that’s by far the most volatile element of religion–the idea of faith, not actually being true or sinning. Perhaps that’s at the root of these religious ecstasies or when real life becomes overwhelmed by the potential of faith and people get overwhelmed physically.

Daughn Gibson:  Yeah and, as much as I would like to see a ghost or have a UFO visit me, I would love to have a religious experience. I would love to be called on in some way. But it’s hard to adapt to the world and how chaotic it is without this crazy religious fantasy going on behind us, so I’ll just tread lightly there and see what happens. It’s a long life.

AD: Have you ever encountered any sort of paranormal experience or some extremely unlikely natural phenomenon?

Daughn Gibson:  I don’t know if it’s me or what… but when I’m either on tour or traveling with somebody, I have this propensity to summon a state of group sleep paralysis. This has happened a couple of times to me now where I’m with someone for quite a while, and it might be an exhausting trip and maybe the last nights or one of the nights in between, and we will be paralyzed and will see hallucinations.

AD: You all see and remember the same thing?

Daughn Gibson: Well what happens is we’re all trying to yell out each other’s names, and we’re just completely stricken with fear. When one of us is able to break through, we start screaming and yelling and having terror fits about what we’re seeing and what’s happening. One time it was me and my friend in a hotel room in Arkansas and we were driving a truck across the country, and we had this sleep paralysis in the room. A girl was crawling on him and there was a weird drifter in the room swinging keys around and we both woke up in pure panic, tears in our eyes, yelling and screaming. We fled the room, got in the truck and kept driving. The last time it happened was last year on tour, me and my guitarist and my tour manager, we all had it. And you know, it was terrible, dude, it’s terrifying. Actually, I had read prior to the last time it happened that if you let it go, you know, go with it… that you can either astral project or some other weird thing. So I remember trying and the harder I tried the more intense it got. At some point, I fell into some man’s mouth, and that was it. Panic really started.

AD: Wow. That’s cool that it has happened to you in both your trucking life and touring life. That must be affirming in some way?

Daughn Gibson: Yeah, definitely. Hoping it happens again, ’cause it is just an experience that has to be gone through, it’s fucking wild. The first time it happened I was convinced we were in a haunted room, and then the second time it happened I figured maybe it was a product of exhaustion and just communal exhaustion, but I still can’t explain how the subconscious works that way–I never knew it could work in a group way, where there’s this drift going through different brains and making them react the same way. That to me is unexplainable–I almost don’t want to know how it works because I enjoy thinking about it so much.

AD: When you lose the mystery, you loose out on that altered state depicted on your album cover.

Daughn Gibson:  That’s right. It’s a phenomenon of pure faith. And if the science comes in, it just ruins it.   words/ a spoto