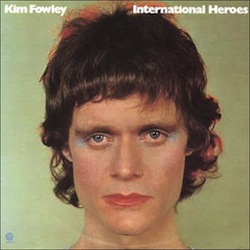 Waxed around the time he produced legendary recordings by the Modern Lovers, it’s no surprise International Heroes is one of the best albums from the ubiquitous Kim Fowley. Son of actor Douglas Fowley, Kim produced the novelty hit “Alley Oop” in 1960, released several commercially unsuccessful solo albums and produced/composed various oddities for other artists (including Kiss) before eventually unleashing the Runaways on the world. And that’s just skimming the surface. He even found time to write songs with Skip Battin, which were recorded by the Byrds (Untitled LP) and Gene Parsons.

Those who have worn out their copies of Roxy Music/Eno/Bowie albums will be thrilled to exhume this forgotten (read: widely unknown) specimen of oddball glam. Judging from the cover, he didn’t want to leave anyone guessing as to the sound he was shooting for. The platter plays like an instant classic, falling into some no man’s land somewhere between Roxy Music and the New York Dolls. Like Eno, he’s often playing post-punk years before it existed, but Fowley’s songs are looser and more accessible, sure to get you hooked on the first spin. “Something New” is simply a perfect pop song with a great update on a Byrdsian jangle feel. “I Hate You” is a gloomy slice of contempt that’ll leave you feeling good about your shitty mood. “Dancing All Night” rocks like a garbage can bound outtake from Sticky Fingers.

International Heroes is yet another example of an exceptional rock & roll record that is in dire need of a remastered CD release (though it is on iTunes). And good luck finding any cheap copies on ebay. words / j bonanno