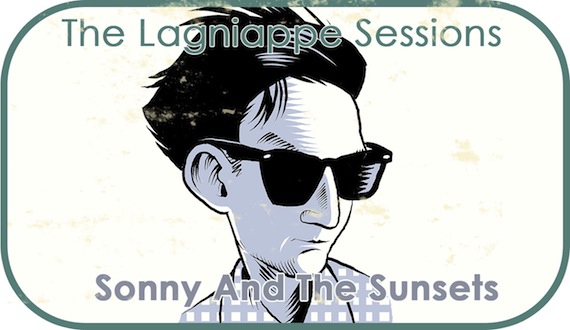 Prolific – a word that is often bandied about in reference to artists who reject typical release schedules, and/or have concurrent projects in the works at any given time. Sonny Smith meets both criteria, and with increasingly inspired results. Thematically, Sonny And The Sunsets latest — the synthesizer heavy Antenna To The Afterworld — has aliens on the brain, the space variety. For this installment of the Lagniappe Sessions, Smith and The Sunsets pay tribute to The West Coast Pop Art Experimental Band, covering “Tracy Had A Hard Day Sunday” and “Buddha”, as well as their take on the Velvet’s “The Black Angel’s Death Song”. Sonny’s notes, in his own words, below…

The West Coast Pop Art Experimental Band is a fantastic band and so I covered these. “Buddha” is my favorite song. I don’t have a big reason why. Their version sounds much better, obviously, and the lyrics are incredible. “Tracy Had A Hard Day Sunday” is an epic tale, incredible lyrics. Rusty Miller helped me with these. He’s a musical genius. Top form major artist of the guitar and shaman of songcraft. As for the Velvet Underground song, I made it with Sunfoot, Chris Johansen’s experimental almost de-evolved band if I can call it that. They came to San Francisco and we recorded some things in my apartment. Then, around this time, there was a comp going around, that Castleface put out of VU covers and I took one of the jams I made with Sunfoot and turned it into “The Black Angel’s Death Song”. They rejected it for the comp. Ouch! I liked it anyways, because the lyrics are bizarre, incredible in fact. I also put the chorus from a West Coast Pop Art Experimental band song on there called “I Won’t Hurt You” which I first heard on an Oh Sees record. Then I put a Fresh ‘n’ Only’s chorus on there from one of their early songs “Peacock and Wing”. I was just trying to kind of unite all these people from the neighborhood into one song. Sort of reference these different folks along the way of a 3 minute jam. Chris Johansen, Fresh n Only’s, West Coast Pop, Dwyer, Sunsets, VU all in one weird Devo like song. So that’s how the VU cover came out like it did.

10 thoughts on “The Lagniappe Sessions :: Sonny And The Sunsets”