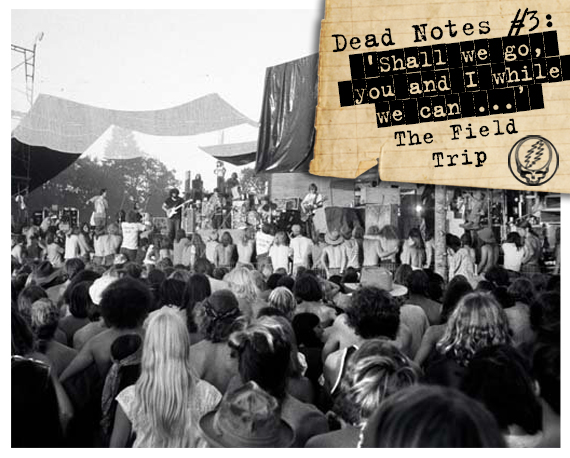 Welcome to the third installment of  Dead Notes, where we find ourselves deep in the heart of Oregon at the Old Renaissance Fairgrounds in Veneta, August 27, 1972. The Grateful Dead have now been home 3 months from a barn burner spring tour of Europe, where they famously divided themselves into two traveling camps — the Bozos and Bolos — wreaking musical and comedic havoc along the countryside. Upon returning to the states the party didn’t stop, with the band performing a handful shows along the East Coast before returning west into the arms of Ken Kesey’s  Merry Pranksters. The Kesey family creamery business was in dire need of cash and prankster Black Maria was sent to San Francisco to beckon the Dead to return to rural Oregon and perform a benefit gig in the name of acidophilus. The day would become known as ‘The Field Trip’ .

There is little argument amongst Dead loyalists that 8/27/72 ranks as one of their top 5 performances, ever. It is a show of epic folklore — where the fat old summer sun punishes the crowd with 108 degrees, drinking water has run out and anything liquid has been spiked. This includes the refreshments for the cameramen on hand to document the band, whose filming captures their dosed exploration of some very intense jams, many of which are beautiful, dark and transcendental — often all at the same time.


As night settles in and the heat breaks, the band return to the stage for the third set. A dog barks and they strike the first notes of “Dark Star.” The music bends with familiar noise-melt, but the bizarre echo on the tape adds an unearthly dimension of sound. This is no ordinary rendition. We find ourselves straddling the realms of light and dark — figuratively and metaphorically. The first section before the opening verse finds the band playfully tagging each other as themes are visited and abandoned for deeper grooves. Just before the first words are sung, Phil hits an almost classical bass melody, nodding to his pre-Dead days. Coming out of the lyrical section, the band quickly move into a dark allure of jams that conjure questions of life or death between the notes until the band languidly plucks to the next section. Phil settles in with Bill for a bass and drum duel with a fast jazz swing for an all-too-brief two minutes, before Jerry pulls them back into the fold with a series of licks that blast off and weave amongst Keith’s atonal barroom piano work. Jerry blazes back through, locking in with Phil, briefly falling into the legendary “Feelin’ Groovy Jam”. Just as quickly, the jam disappears into a thunder of loud, dark notes that finally settle into a bleak, ethereal final pass. Jerry starts to play “Morning Dew,” continuing the intensity with a song about the morning after a nuclear holocaust, but Bobby pulls it back as he leads the band into “El Paso”.

This “Dark Star” clocks in at a brooding 31 minutes, 26 seconds, leaving listeners — and presumably, the cameramen — rethinking their lives several times over, apace with the song. words/ d norsen

The unreleased concert film Sunshine Daydream, documenting that August day in Veneta 1972, premieres this Thursday at select theaters. Originally shot on 16mm, the film has been restored to HD resolution for its theatrical release along with completely remastered audio. See you in the seats.