(Welcome to Videodrome. A new column plumbing the depths of vintage underground cinema — from cult, exploitation, trash and grindhouse to sci-fi, horror, noir and beyond.) 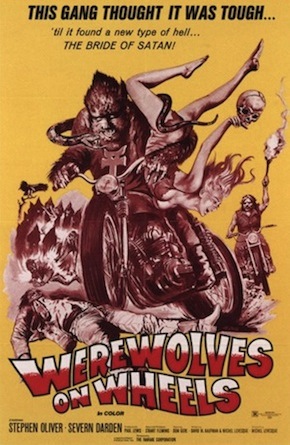 As Vietnam festered, Nixon lied and free love gave way to rampant VD, it was inevitable that the outlaw biker film genre, reaching a zenith with the introspection and groovy drifting of Easy Rider, would degenerate into witchcraft, cannibalism and supernatural animal rape. Werewolves on Wheels is the Western roadhouse culmination of that pop culture shift.

Despite a hokey name that conjures thoughts of more innocuous schlock, this 1971 occult highway yarn manages a tad more than your average popcorn creature feature. The hippie road tunes combined with the worst imaginable manifestations of devil worship result in a genre mashup that nods both to America’s political antiestablishment and outright depravity. It’s dirty and creepy, contemptible but creative. Even if the filmmakers had no idea what they were trying to do–and by all accounts they didn’t–this 83-minute Satanist romp successfully evokes a prurient ‘60s counterculture vibe before ceding ground to a Roger Corman-esque display of cheap ‘70s exploitation and bad special effects. Psychedelic tunes and altered states of consciousness are the backdrop, while the menacing specter of “shape-shifting beast come to rip your lungs out” dominates even the drugs and loose sexual mores of the characters.

The first four minutes are brimming with artistic vision. Behind Don Gere’s dark and droning guitar score, the opening scene introduces us to a cast of bearded libertines as they ride toward the camera, fuel exhaust permeating the desert air. One by dirty one, they attack the open road with gusto, revving their motors, weaving, spinning out and executing motorcycle tricks at high velocity. It’s a tasty hors d’oeuvre to the campy black magic and barroom violence that follow, and if it had only maintained this energy and slickness, we’d be talking about a different movie.

As it is, the story takes up the tracks of a California biker gang, the Devil’s Advocates, as they speed across a barren highway on a drug-infused journey of undisclosed intent. Losing their way, they stop for the night on the grounds of a “church” tucked away in some hills off the beaten path. Much to their initial pleasure, they are fed by a kindly group of hooded priests before settling into a deep, inebriated stupor. Then shit gets real.

Sometime during the night, the gang leader’s girlfriend sleepwalks to the temple, drinks human blood, strips naked and starts dancing with a python as our friendly acolytes butcher a live cat and chant with debauched pleasure. The gang, meanwhile, begins seeing evil visions. Could be merely the copious amounts of LSD they’ve consumed or…could be that they’ve been cursed and a few of them are now lycanthropes hungry for human flesh. 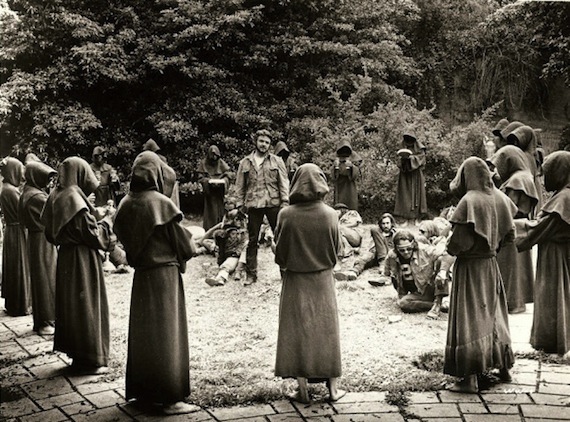 Regardless, the motorcycle club members awake from their fever dreams and, resenting their cultish hosts, exact vengeance with a prison style beatdown. Imagine a savage pack of bipedal dire wolves in denim jackets fist-fighting Benedictine monks while Crosby, Stills and Nash strum out a folk tune in hell. That’s roughly the deal here.

Afterward, the Devil’s Advocates mount up and move on. More trouble occurs the following night when the gang is camped out in a desolate wash somewhere off the highway. A randy biker ducks away from the fire to get it on with Shirley, one of the gang’s lusty groupies. A shadowy were-beast waylays them en route and we’re treated to the sounds of feral growling, screams and a rough cut of a some bloody, torn up faces.

No further mayhem occurs, but the next morning’s spectacle is, in this reviewer’s humble opinion, the film’s most memorable scene.

Adam, the group’s alpha, begins an impromptu eulogy while standing over the makeshift graves of last night’s wolf snack. Midway through his opening comments, our fearless leader whips out a bag of cocaine, does a huge bump and wistfully remarks that his fallen comrade “didn’t have a kind bone in his body.” When his speech is done, another biker pipes in and asks, “What about Shirley?” After all, his face seems to say, she died, too. The response: “Shirley? She was a great freak, man.” Everyone drinks to that, before desecrating the burial site with empty beer cans.

The first half hour of screen time–lengthy satanic ritual scene included–strikes the right trippy/creepy balance. This is, of course, the California of Anton Szandor Lavey and Charles Manson, where hidden amidst desert highways and palm-ensconced hills one can imagine secret temples filled with inverted crosses, cloaked minions, pentagrams and chalices of human blood. You know, animal sacrifices…warlock rites. Nothing but the good stuff.

Unfortunately, the movie bogs down considerably, with the amateur script not doing much to move the narrative along. There is some mumbo jumbo about bad vibes and a prolonged sequence during which a few bikers pretend to be dogs, barking and rolling around in the sand. Nuanced metaphor, you see. Overall, the plot follows the b-movie horror formula to a tee. Motorcycle gang meets Lucifer cult, which uses devil magic to change them from violent sex-crazed pack of boozy Harley hogs into violent, sex-crazed pack of boozy werewolves. Hilarity, blood and boobs ensue.

But don’t judge too harshly. Low budget indie films of this era resorted to extreme elements for a reason. Namely, as a competitive response to war desensitization and growing TV addiction. Battling the idiot box for domination of hearts and minds, Werewolves on Wheels resorts to demonic blood theater. Makes a lot of sense when you think about it.

But the Devil’s Advocates are likable and authentic enough, cast of would-bes and never-has-beens notwithstanding. You get the feeling these filthy cretins wouldn’t last long in a brawl with the Sons of Anarchy, but their dialog and antics feel realistic. That is, until a few of them turn to man-wolves and start devouring the faces of other bikers.

Speaking of, the film deserves credit on one very important criterion. It delivers on the promise of the title. Without spoiling anything, let’s just say that if you decide to watch due to an urge to see a wolfman humming down the highway on a Harley Davidson under a full moon, you will not be disappointed.

Werewolves on Wheels is trashy hippie biker smut with drive-in monster movie overtones. But the journey’s not all bad. Along the way it features a slew of creative camera shots and some excellent road footage set to gritty, twangy guitar explorations. No joke, the soundtrack is epic–a stoner folk jam session that marries the film’s forbidding mood with its burned out, leather-cut protagonists.

This is the type of cheap but stylish entertainment that could inspire Robert Rodriguez, if it hasn’t already. There’s enough originality and thought to keep it above the grindhouse heap, not as a must-see but not quite a total waste. And if you feel a little let down, just remember the name of the movie you are watching. Try to keep that in perspective.

Stream Werewolves on Wheels — in its entirety — above. words/ j campbell