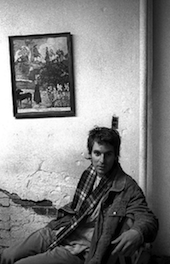 In 2009 I went to see Charlie Louvin play a small club in L.A. on a rainy night in February. Not long into his set the power went out. Sudden darkness, no sound. Louvin said no mind, I’ll play anyway.   Shortly thereafter the club managed to get some auxiliary power cooking for the amps and monitors, and the show went on – illuminated in part by flashlights and candles. It was surreal. Listening to the forthcoming Alex Chilton collection, Electricity By Candlelight, I have to imagine the vibe was similar.

Tales of a stripped down serenade: In February 1997 Chilton and his band were in New York City performing at the Knitting Factory. Just before their second set, as they readied to take the stage, the lights when out. But the show did go on, and was recorded by Chilton fan, and taper, Jeffrey Vargon.   Electricity By Candlelight, out next month via Bar/None Records, captures Chilton’s intimate, super laid back, performance on a borrowed acoustic guitar. Comprised of 18 tracks, the set is made up of covers (Johnny Cash, Beach Boys, George Gershwin, Loudon Wainwright, etc)   – crowd suggestions, old favorites, and as Bar/None puts it, ‘this is as close and personal as it gets. Much of the material (Chilton) never played before or after; a lot of country, some Beach Boys and a few songs he may not have played until that very moment.’

Alex Chilton :: I Walk The Line