(Welcome to Videodrome. A new column plumbing the depths of vintage underground cinema – from cult, exploitation, trash and grindhouse to sci-fi, horror, noir and beyond.) 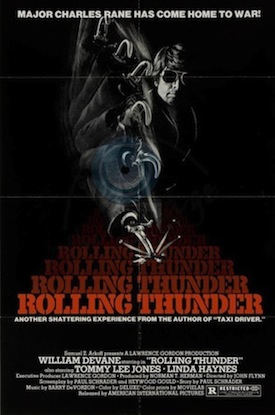 “Why do I always get stuck with crazy men?” “…Cause that’s the only kind that’s left.”

This cynical exchange between U.S. Air Force Major Charles Rane and bar-tarred, war vet groupie Linda Forchet captures the essence of Rolling Thunder, an underrated 1977 revenge pic exploring the emotional numbness and brooding desperation of Vietnam veterans returning to a hollow, suburbanized America that moved on without them.

Popularly billed as a shoot ‘em up, Rolling Thunder packs a surprising amount of psychological baggage. In some ways it shares a kinship with serious post-Vietnam war meditations on PTSD, insanity and confusion, in the vein of The Deer Hunter, Born on the Fourth of July and Coming Home. In other ways, it serves notice as a rugged, violent crime drama, where the body count threatens to rise.

Major Rane is the story’s protagonist and primary sociopath. Tortured and abused for seven years in a Hanoi POW camp, Rane survived by “learning to love the rope.” In other words, he explains, the only way to beat your tormenters is to become friends with the pain.

His tragic role is played with aplomb by William Devane, a ubiquitous character actor whose work, perhaps most recognizably on Knot’s Landing, has never been so fierce. Soft spoken and clearly damaged, Devane’s Major Rane exudes uneasiness and violence behind a placid disposition and a pair of aviator shades.

Returning stateside where his wife has moved on and his young son doesn’t remember him, Rane attempts to reconnect to the Texas Hill Country home he once knew. He accepts with dignity his wife’s dalliance with another man, treats everyone respectfully and attends therapy sessions with a military shrink intent on helping him cope. But the war and imprisonment have seriously fried this dude’s circuits. He sleeps on the floor in the garage, becomes distant with his family and demonstrates disturbing masochistic tendencies. When he politely asks Cliff, his wife’s lover, to not call his son a runt, his distant smile seems to say that this is man is capable of calculated acts of murderous barbarism (no spoiler alert necessary).

After a rowdy Spanglish-speaking band of cretins invade his home, we get a first glimpse of the monster within. Refusing to give up about $2,500 in silver dollars (a welcome home gift from the city), Rane instead chooses to have his hand mangled in the kitchen garbage disposal. He then watches the thieves murder his family before shooting Rane several times and leaving him for dead. End scene.

The film takes a turn toward grindhouse from this point onward–as Rane methodically dedicates himself to finding and inflicting maximum carnage on the fiends–but it is not without deft direction and some memorable creative touches. For one thing, Rane replaces his ruined arm with a prosthetic hook weapon, which instantly places him alongside Ash from The Evil Dead trilogy and Roy Munson from Kingpin on the list of cinema’s greatest one-armed characters. 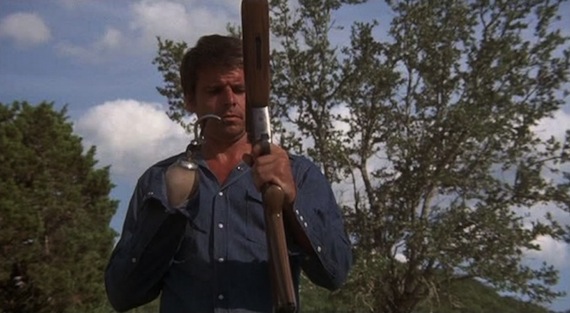 Successfully recruiting the aims-to-please local waitress Forchet (portrayed with a mix of exhaustion and anxiety by Linda Haynes) to his cause, Major Rane loads up a small arsenal in the trunk of his red convertible Cadillac and heads where all maniacal shell-shocked amputee vigilantes go…to Mexico, of course. From there, Rane and Forchet begin tracking down lowlife henchmen with names like Tex-Mex and T-Bird in a noir-ish jaunt through the townie drinkeries and cheap jack-shacks on the other side of the Rio Grande.

As they inch closer to finding the villains, we get the not so subtle feeling that this tale can only end in one of those syrupy, blood-squib exploding shootouts of 70s film that defined the genre and continues to disturb viewers (like your friendly critic) to this day. Given that the original script was penned by Paul Shrader, author of notoriously gritty crime films Taxi Driver and The Yakuza of the same era, such an assumption is no cognitive leap.

On its face, Rolling Thunder follows the standard action-revenge movie model. Protagonist loses everything and is left maimed, only to redeem himself and vindicate his lost loved ones in a blaze of bullets and righteous fury. But RT transcends this humdrum formula in three ways.

Though not a huge box office success, the film enjoys an underground cult status, and has received notoriety as an important Quentin Tarantino influence. One can also clearly see its stamp on popular productions such as No Country for Old Men and, more recently, the Showtime series Homeland.

While there are weaknesses–the final conflict teeters between depraved violence and hammy Hollywood action–Rolling Thunder is satisfying from start to finish. There is an emotional distance shared by an entire cast of disturbed characters here that busts open the classic vendetta film mold and gives audiences something to chew on with their bordello shootouts and narco-trafficker knife fights.