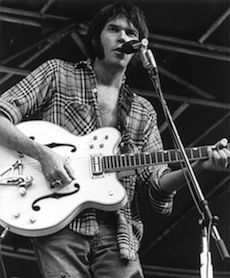 Songs poured out of Neil Young during the 1970s at such a rate that he left entire albums unreleased. He’s dipped into his stash regularly over the years, but there are plenty of tunes still gathering dust, waiting for Neil to finish saving the world with his electric car, and to put the finishing touches on Archives, vol. 2. Knowing how Shakey operates, that’ll be…any time in the next two decades or so.

Until then, take a listen “Sad Movies,” a still-unreleased solo acoustic fragment debuted on the man’s barnstorming, post-Zuma world tour with Crazy Horse. It’s a beguiling, lovely thing with a fragile melody that stands tall with any of Neil’s best. “Sad Movies” actually appeared regularly in 2007 setlists, as though someone had reminded Neil of its existence. Then, typically, he forgot about it again.

As a follow-up, dig the shaggy, electrified “Let It Shine” from the same show’s electric set with the Horse. Long Many You Run houses a relatively middle of the road version of the track, but here, Neil and the gang are headed straight for the ditch. words/ t wilcox