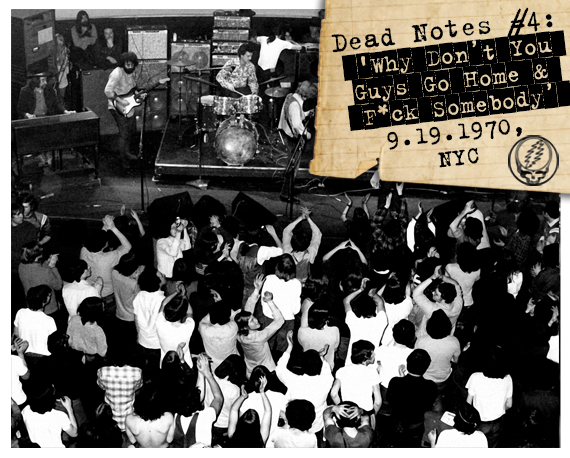 Welcome to the fourth installment of Dead Notes. Coming down from the 8/27/72 ‘Dark Star’ featured in #3 we’re heading to New York City’s East Village and the infamous Fillmore East. West coast rock & roll impresario Bill Graham opened the Fillmore in March 1968, making it both the first official rock music theater in the city and a second home his San Francisco acts. The Grateful Dead, of course, were no strangers to it’s stage having played there nearly 30 times before the doors were closed for good in June of ’71.

September 19, 1970 was no ordinary autumn evening as the previous day Jimi Hendrix was found dead in London, at age 27, from asphyxiation. A collective grieving permeated the air that night as the crowd gathered at the Fillmore to mourn with the Grateful Dead providing musical moral support. Midway through the set we hear the Dead tackling an immense segue beginning with “Dark Star”, leading into “St. Stephen”, and dropping into Buddy Holly’s “Not Fade Away”, with Mickey and Billy providing a raucous syncopated backbeat (as Bobby preaches that his ‘love is bigger than a Cadillac’). Jerry then flips a switch, steering the crew into a spirited jam of The Youngbloods’ “Darkness, Darkness” that soon darts into a quick tease of “China Cat Sunflower”. Bobby once again commandeers the vehicle bringing a close to “Not Fade Away” as the band turns on the high beams for Bobby Bland’s “Turn On Your Lovelight”. And then things really open up.

This is the  crî¨me de la crî¨me of 1970’s “Lovelight” as Pigpen turns on the dirty charm from the outset…without warning…as his baby broke his heart and he is going to let you hear all about it. The band is in tight form providing room for Pig to wax poetic as he works his way through the stages of heartbreak and forgiveness with a woman whose ‘got box-back nitties and great big noble thighs, working undercover with a boar’s hog eye’ – all the while working the crowd up as he begins to play matchmaker amongst the attendees. Bypassing foreplay, Pig tells the new couple all the man’s gotta say is ‘Let’s Fuck’. Novel approach. Jerry then kicks the riff into high gear while Pig takes the entire suite home as the night draws to a close. As the Dead apologize for cutting it short due to band ailments, Pig leaves the crowd with one last bit of wisdom: ‘Why don’t you guys go home and fuck somebody?’…possibly providing the city of New York with a small population burst in the autumn of 1971. Thanks Pig. words/ d norsen