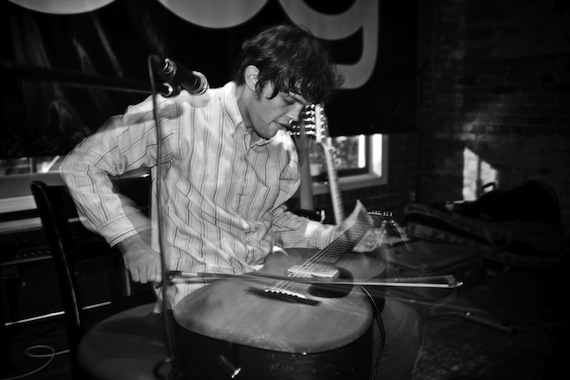 Diversions, a recurring feature on Aquarium Drunkard, catches up with our favorite artists as they wax on subjects other than recording and performing. This week we catch up with William Tyler, who’s been touring behind his second solo lp, Impossible Truth, released earlier this year via Merge. It’s one of our favorite records of the year – instrumental or otherwise. Below, Tyler’s stream of consciousness reflections concerning his late-Summer North American tour out west. Tyler is presently touring Europe — look for more US dates beginning in October.

I’m sitting in a hotel bar in Cincinnati, listening to the menacing and comfortably familiar electric sitar of Dave Stewart on Tom Petty’s “Don’t Come Around Here No More”. It’s a little hard to fathom that I was on these same highways a month ago, driving from Nashville to Columbus to begin my three-week cross-country trek. As I type this, my computer auto corrects ” cross” to “crisis “. Nice.

When I returned the rental car this Monday, the odometer read 13000 miles. It had been 5000 when my dad and I rented it. It was a gray Camry, new car smell, satellite radio, proud and clean and anonymous and hardly aware of the intense trans continental journey I was about to subject it to.

The continental divide is the latitudinal point that decides where the rivers’ paths are guided: to the Atlantic or to the Pacific. I would cross this twice on the tour. Fuck man, 8000 miles on a rental? That’s more than most people drive in a year. My carbon footprint is like Godzilla. The only way to neutralize it is to walk everywhere and just eat parsley out of my backyard for the rest of the year.

I spent a year daydreaming about the end of oil, the sprawl of America, the lure of the sleeping seemingly dead places off the interstate and hidden on the ‘blue highways’. Ghost towns of old or towns that were fast becoming ghost towns. James Kunstler and Richard Heinberg and Mike Davis were my mental tour guides and all of them would be horrified at how environmentally unsustainable my trek was. But hey, I’m a working musician. We’re not quite dinosaurs yet but we are still fighting for relevance just as much in this insane world, still having to justify our existence. Those big old town cars that Detroit used to crank out back when we had cheap gas are just like the rock stars of thirty (shit, twenty!) years ago who figured the party would never end and people would still want to pay for “art” forever. Anyway I saw my trip as a cross between Lewis and Clark, National Lampoon’s Vacation, and  Two Lane Blacktop.

True Fact: Anywhere in America right now, you can turn on your radio and find Rush Limbaugh or the Eagles playing. I’ve been testing this thesis for almost a year. 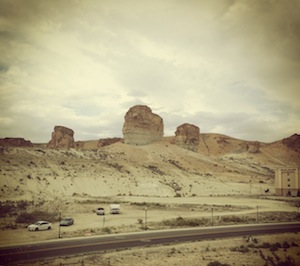 I was on a three-week tour that would take me through the two most populated states in the country, California and Texas, and the least populated, Wyoming. Someone in Salt Lake City told me that there were only two escalators in the entire state of Wyoming. That was really comforting to me for some reason.

My tour was beginning two days after Mercury came out of retrograde. I am convinced that before I had awareness of the existence of Mercury in Retrograde, it had no effect on the events in my life. I learned about Mercury in Retrograde in the middle of a similar cross-continental tour five years ago and as soon as we were made aware of it everything started breaking: flat tires, frayed nerves. I don’t agree that ignorance is bliss but it’s a lot less complicated.

You get west of Kansas City and everything begins to open up from the sky to the possibilities of space to the distances between towns. This is the part of the West that people used to just pass through on their way to California or Oregon until the government got savvy in the 1860s and started essentially giving the land away to prospective settlers. Wind, wheat, corn, time to reflect are all in abundance. There is the tyranny of big spaces out here, you can imagine how humbling and terrifying it would have been to the covered wagon rovers but in a car with satellite radio and the promise of gas stations every few miles it is possible to zone out in way that is calm and deliberate.

I’ve tried listening to the news. Too cerebral, never anything uplifting, and being informed on tour is kind of like holding an unlit cigarette in your hand for an 8-hour plane flight. No use. A lot of the oldies stations, too familiar. Getting stuck on the “Deep Tracks” station and lots of country oldies. Listened to a rodeo on scratchy AM radio driving across Nebraska. That was a nice surprise.

My dad on driving through Wyoming: “Now I understand Dick Cheney.”   Does Cheney own both escalators in Wyoming?

Salt Lake City reminds me of the towns you would build in the computer game Sim City, where you could just arbitrarily lump buildings next to each other. It’s clean but ersatz, almost like North Korea on a blind date with Reader’s Digest. It’s tucked into the dip of the mountains with a skyline that cries with beauty. You understand pretty quickly how Brigham Young and company must have been stoked to find this place and basically said, “Fuck it, we aren’t going any further, this place is nice.”

My gig in Salt Lake City coincided with Pioneer Day, essentially the Mormon Fourth of July. It commemorates the day that Brigham Young and his first band of settlers got to the spot the city now inhabits. Not the best night for a solo guitar gig. All was going well even with the sparse crowd but I mistook the fireworks show going off downtown for my amp breaking. Which it did anyway later in the show.

As the sun set over Boise, warming the ground level stare with something almost tragic, I was talking with one of the locals about the ‘anxiety of congestion’. He had grown up on the East coast and the endless stretch of populated places was the main thing he had wanted to get away from when he found his way out west. I could understand this. Out here it’s eight hours between cities and there is something very calming about that. The isolation doesn’t seem that lonely, although playing a show to one person in the crowd that night did. words/ william tyler / photo pj sykes