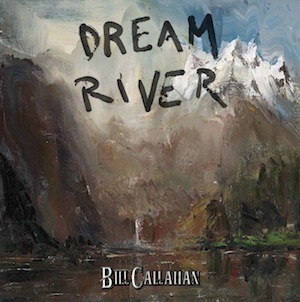 Dream River is a display of Callahan’s peak powers, a masterpiece work documenting Callahan’s aesthetic as a refined craft. Over his 20 plus years of making music, his voice has matured, deepened, become more controlled. The farther back one listens into his catalogue, back into the Smog years, Callahan’s lyrical tone and delivery are more present, overt, whimsical (and, naturally, more juvenile). Superficially more fun but not nearly as expressive as his songwriting and performance on albums like Apocalypse, and Dream River, his most recent and realized work. He’s pared down the language of his poetry, essentialized melodic ideas and steadied his guitar grooves. Singing low and slow, he can gently inflect a single word and suggest an entire world of meaning. Callahan’s greatest skill, his magic, is the immaculate control he exercises over his delivery.

Dream River’s unforgettable opening verse hinges on a stunt of Callahan’s delivery: “Drinkin’… while sleepin’… Strangers… unknowingly… Keep me company… In the hotel bar…” Here a proud melody pipes in, steel guitars and a fiddle, “Looking out a window that isn’t there…” There are hints of a “western” sound, pawing percussion like horse hooves in a lazy cantor, but it’s from a western where the frontier is a bottomless pit of introspection, “Lookin’ at the carpet and the chairs…” His perspective is cinematic, zooming in astoundingly close. Oftentimes it seems like Callahan’s world is extremely close around him. “Well the only words I said today are ‘beer,’ and ‘thank you,” he says, so matter-of-factly it’s funny, a blackly comic “Sunday Morning Coming Down.” He repeats those words, “beer… thank you… beer,” in absent-minded conversation with the pastoral fiddle. His band hangs on his every word, breath, nuance–a feat of studied musicianship. And then in a beat the unhurried song picks up and shifts focus, “Giving praise in a quiet way… like a chuch. . . that’s far away.” There’s tour de force storytelling here proffered in a most subdued way, and this song, “The Sing,” is a proclamation, a thesis statement.

“Drover,” the first song on Dream River‘s predecessor, Apocalypse, performs a similar function for that album but with the soaring overview of an orchestral suite introducing an opera. These opening songs contain a small part of each and every of their respective album’s components. These songs are points of entry. Apocalypse was a Homeric epic, a contemplation of life and death, a clinging to reality, experience, the exterior world. The music exhales the dust stamped up by the cattle that one fine morning and you can nearly taste it in your mouth. These two albums share some western frontier imagery, but Callahan utilizes genre much in the way David Lynch uses cop noir in Twin Peaks: a familiar story mold which serves as the vehicle for exploring the unknowable infinity of the interior world… the dream world. “The Sing” ushers in Dream River in a friendlier, laid back manner, a playful premonition of the serious, inward tone the rest of the record.

For all his focus on detail, delivery, and control in the exterior shell of the music–the sound, the style, the rhythm–Callahan’s lyrics in Dream River are concerned with what is out of his control, chaos, fractured reality. “Is life a ride to ride? Or a story to shape and confide? Or chaos neatly denied?” he asks in “Ride My Arrow.” The song’s title recalls a libidinal Smog lyric except that he’s asking these questions from the perspective of prey hanging from an eagle’s talons. Callahan aligned himself with this set of archetypal naturalist language long ago–the bird, the tree, the river, the mountain–bare words free of any extraneous specificity. Callahan sounds quite at home in the primordial metaphor of his river. “Melt the snow of dreams… dream river,” he sings in “Seagull.” The details in his stories about going up in a small plane and painting names on boats are obfuscated with lines like “I always go wrong in the same place, where the river splits towards the sea,” and “I never truly knew who I was working for anyway…” There isn’t much certainty or clarity in this world, journeys are misdirected, a river’s path is dammed up by beavers, javelins are launched and never meet any target. “The land I love is splitting in two… again… and again and again… And war muddies the river, and getting’ out we’re dirtier than gettin’ in” he laments on “Arrow.” The musical arrangements for the songs are dark, fogged in trilling, breathy flute and smeared with slowly howling electric guitar.

Callahan’s music doesn’t have an answer to the question of life being a ride or a story or chaos denied. Rather these songs exalt the question through Callahan’s skilled artifice. “Oh I have learned when things are beautiful… to just keep on…” he sings on “Winter Road.”   And it seems beautiful things can be found in the close intimacy of another: a lover, a friend… Such human connections are vital, empowering, necessary. “I never like to land. Getting back up seems impossibly grand…” he sings in “Small Plane,” “…we do it with ease.” That “Riding For the Feeling” from Apocalypse is recontextualized, riding together, under one another’s sphere of protection: “I like it when I take the control from you, and you take the control from me.” Callahan is a dark prophet of hope, making good on a toast he made many years ago as Smog in “Our Anniversary,” “And here’s to next year/ Maybe you’ll join me in my car/ We’ll drive together/ But not too far.” words/a spoto