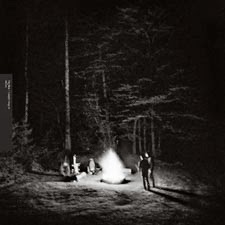 The Men rarely subjugate themselves to any neat genre filing system, essentially daring record store clerks to stock an acoustic record, entitled Campfire Songs, in punk bins. And while no one will actually fight over where the band’s varied output should sit, there’s two things that are becoming increasingly clear concerning the (present) quintet. First – how technically gifted and precise they can be, and secondly, how incredibly well they play when they toss those gifts and chops out the window and just rip. With Campfire Songs, that ripping proves to not only be of the turnt-up amp variety. Enter Kevin Faulkner, who brought pedal steel, and then much more, to the New Moon  sessions that birthed this month’s acoustic EP.

We caught up with Faulkner last month to discuss how the band’s live sound is evolving, and the ever-evolving expectations – or lack thereof – for The Men. For those of you reading in Los Angeles, the band gigs at The Echo on October 10th.

Aquarium Drunkard: Why this record, why these sessions?

Kevin Faulkner: It wasn’t really like, “Hey, let’s make sure we do these acoustics so we can release them later.” It was to have a good time. They probably sound better than we thought they were going to, which is why they’re coming out. It was part of how we were feeling up there, where we were at. We recorded this stuff at the same time as New Moon. There was a fire pit at the house we were at and one day we just built a massive fire —   it happened to be the night of the Super Moon. We were just off on our own up there anyway and were like, “Let’s just drag a bunch of stuff, some microphones, outside and jam around the fire.”

AD: At what point in the recording process were these sessions done, and in what form did these songs exist at the time?

Kevin Faulkner: We recorded those about halfway through the electric stuff – it was just one night that we took a break. All the songs from New Moon were demoed acoustically anyway.

AD: What’s your own approach to switching instruments – between recordings, between live sets – and how do you shake it out as a group?

Kevin Faulkner:  I didn’t go up to the house right away, but knew I was going up there to play some slide. I then got a text from Mark who asked if I’d mind playing some bass on some tracks. I got up there, wrote a couple of bass lines, and Mark was like, “Oh shit, he knows how to play bass, maybe we can have him on a couple of more.” We try to do everything live – so if I was playing bass, that meant Ben was going to play guitar or piano, Mark would switch to piano – it was whatever we needed at the time. For a lot of the shows after that, if I was on slide, I’d be on that, if I was on bass, I’d switch. We did that for a little while, and now, the last year, I’ve played bass the whole time. But now I’m switching back to slide… I don’t know, I think we’d like to go back to switching back and forth again during the set.

AD: In some corners The Men are known for the harder aspects of their catalog. How did you bring a more delicate instrument like lap steel into that setting and find a way for it to work?

Kevin Faulkner: They asked me! I did the cover photo for Leave Home and that was the first night I’d seen them. I’d been friends with Rich [Samis, drummer] for a long time, and with Chris [Hansell, former bass player of the band]. I saw that show and was like, “Fuck. I gotta weasel my way into that band somehow.” I play bass, I play guitar, I sing, I play whatever, I just wanted to be in that band. Nick came over to edit photos with me for the record and I’d borrowed my bosses slide guitar; it was in the corner in this weird little case, and we talked about it, I showed him some songs that I had and that was it. A month later I got an email from Mark asking if I wanted to jam and I was like, “Fuck yeah, I wanna jam.” I went over that night, we jammed on “Country Song,” “Oscillation” and “Presence” from Open Your Heart, those were the heavy slide ones from that record. And especially when we started playing live, it was just slide through a Big Muff, going crazy, making it sound as big as it could.

AD: With each member engaged in other projects, how do you make the distinction between those and The Men?

Kevin Faulkner:  Mark, Nick and Ben write the bones of the songs, it’s whatever those guys are into and whatever is coming out of them. Once everyone gets ahold of it, you add whatever flavor.  I play in another band that’s more country-ish, a country surf kind of thing, I get to take elements from that and bring it into The Men. The stuff that I write on guitar is way, way different than the stuff that Nick writes on guitar.   It just comes out the way it comes out. I just wanna make it sound the best that it can sound. Like with “The Seeds,” there wasn’t a bass line; I wasn’t supposed to play on that. I was in the kitchen, just dicking around, and came up with something, and they were like, “I think that would go really well, why don’t you lay that down?”

AD: Do you see other bands/labels/scenes that you view as contemporaries sonically/thematically/philosophically and think, “this is where it’s at right now”?

Kevin Faulkner:  We’ve played with Milk Music a lot, Destruction Unit, those guys are maniacs and are taking off, they’re really, really good. Gun Outfit, from Olympia, a whole different vibe from that heavier stuff. CCR Headcleaner from San Francisco, those guys are total freaks. Those are the bands I get to see because we play with them a lot, they stick out in my head. Nude Beach, from Brooklyn, you see those bands and go, “Holy shit, this is a pretty cool time in music. If this is what I’m hearing, that’s amazing.” We’ve been lucky, we travel all over, play with all kinds of bands. They all have the same kind of ideas about music, about what they want to do in life – which is music… all the time!

AD: Listeners come to the band with different ideas of what ‘the sound’ of The Men is. Do you ever look out and go, hey, people aren’t responding to this in quite the way I thought they might?

Kevin Faulkner:  We definitely do what we think is right, we play what we like. If we don’t like a song, we’re not gonna play the song. For one thing, it depends on where you look. There are certain people who comment, saying, “Oh these guys sold out, why don’t they do Immaculada again?” And there’s people who really dig it. You want fans to trust you, and to go along with what you’re into. I think it’s split, I think less and less recently people have been like, “I thought these guys were supposed to be punk, what the hell?” I think people are rolling with it, which is cool. If you come and see us live, it’s not like we don’t play that shit anymore. We play a lot of old stuff – we play heavy as shit, and sometimes we play the newer songs that aren’t so heavy. If you come and see us you’ll get the whole spectrum, from each record. It’s like Neil Young, some of his songs are so fucking heavy, or some Petty songs or Dead songs, but it’s not like you’re gonna mosh to them, they’re just heavy, heavy jams. The old stuff is still there, the new stuff is here. It’s gonna change, it’s always gonna change, just have a good time. words/ b kramer

One thought on “The Men :: The Aquarium Drunkard Interview”