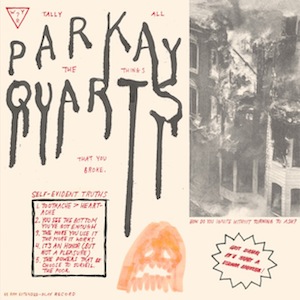 Following the re-release of 2012’s stellar Light Up Gold on respectable mid-level indie What’s Your Rupture? earlier this year,   the quartet of Texans-cum-Brooklynites in Parquet Courts have ridden the critical wave to respectable mid-level success. They were the unofficial kings-in-the-making at Pitchfork Fest this summer; they played Chicago no less than three times that weekend, including a major-league taping of Sound Opinions with fellow post-punks Savages at a packed Lincoln Hall. It ain’t Nirvana – hell, it ain’t much of anything, all things considered – but urban angst has paid off reasonably well.

So it’s heartening to hear the group tinkering with what’s suddenly become their signature sound on the stop-gap EP Tally All the Things That You Broke. When the Quartz slipped opener “You’ve Got Me Wonderin’ Now” into their sets this summer, it fit like a stone in its setting. Here, the band quickly nod towards the opening one-two-three of Light Up Gold’s “Master of My Craft,” and Max Savage’s tight drumming plucks the song along, but the group let the song unravel as it goes along; the flute (of all things) that’s been punctuating the chorus begins to break off, shifting into fed-back guitar that shakes itself all over Savage’s final verse. It’s a small difference, sure, but that kind of experimentation within a vacuum was what made Light Up Gold so thrilling. Should you need an update to “Stoned and Starving,” “The More it Works” pins wriggling twin guitar lines to a five-minute groove with brushes of Strokes tossed in between the verses.

But where “Stoned and Starving”  found Savage wandering with pointed aimlessness through Queens, here he’s the one giving directions. It’s odd, and maybe even a bit disconcerting, to hear him issue such standard-cloth punkisms as “Express yourself without the tools that they give you/Want something they didn’t tell you to want” in such a straightforward way; earnest confidence is a not the usual look for these guys. The EP’s liner notes, written by the suspiciously un-Googlable Melvin Kroewerker, say that our heroes are here “to teach a few new tricks to a dying dog,” that dog apparently being the ragged cur known as the counterculture. But you have to wonder whether someone holding a vinyl copy of a small-run EP from a still-pretty-obscure indie-rock band really needs to be told to seek their own avenues. Then again, the fact that you chose to read this review, not to mention the fact that Parquet Courts have never tried to hide their source code, suggest that our anxiety over influence may all be for naught anyway. Whatever the case, the sound of that chorus – “The more you use it, the more it works” – and the urgency in Savage’s voice as he repeats it over he and co-leader Austin Brown’s insistent guitar lines, render the point moot by force of sheer pleasure.

But for all its tweaking of the original formula, Tally All the Things That You Broke is not without its own pioneering. Brown shouts like Stephen Malkmus circa “Conduit For Sale!” over a brief spindly-legged Steely Dan walking groove in “Fall On Yr Face,” and seven-minute closer “He’s Seeing Paths” rocks like Beck’s “Hotwax” recorded on a shoestring budget. The latter’s ringing phones, creaking doors, and Casio cowbells, and Brown’s monotone echoing of Savage’s breathless delivery, mark it as easily the most far-out thing these dudes have attempted, and while neither track is as thrilling as the opening trio (which also includes the straightforward “Descend (The Way)”), they aren’t soft filler, either.

Parquet Courts aren’t going to change the world all that much, and they know it; he’s a fool who believes fully in the sincerity of that liner-note jeremiad. But there is an undeniable spark to what they do, a strange energy and excitement that goes beyond the delight of seeing someone reanimate post-punk corpses. It comes from the implicit honesty that undergirds their music and reveals itself even while informing the sarcasm and irony; it’s hard to doubt these guys for a second, even when they’re full of shit. Despite the EP’s weird excesses, there’s no pretension here, and no attempt to get you to look away or to legend-build. You never get the sense that you’re dealing with anything other than a few dudes who just want to tell you about themselves and get your feet a’ tappin’. That never seemed all that interesting before, but they’ve got me wonderin’ now. words/ m garner

6 thoughts on “Parquet Courts :: Tally All the Things That You Broke (EP)”