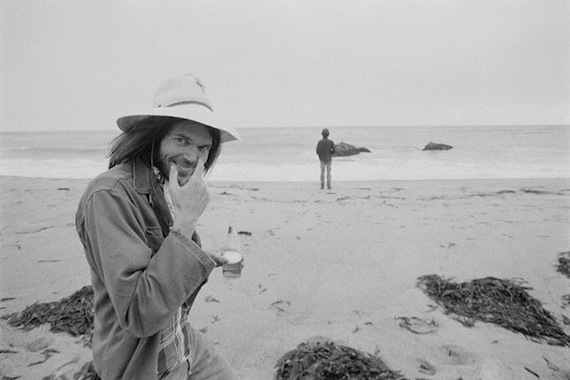 “I’d like to start with a kind of a quiet song,” Neil Young mutters, having popped up unannounced at a Leon Redbone/Ry Cooder gig at NYC’s Bottom Line in May of 1974. “It’s called, um … it’s called … ‘Citizen Kane Jr. Blues.'” So begins one of Young’s most famous bootlegs, during which he debuts several tracks from the then-unreleased On The Beach, instructs the audience on how to make honey slides (a potent marijuana + honey combo) and generally blows the minds of every single person present.Still officially unreleased, “Citizen Kane Jr. Blues” — later retitled “Pushed It Over The End” — is one of Neil’s doomiest creations, a minor key dirge detailing the exploits of a mysterious femme fatale. “Good lookin’ Milly” seems to be a Patty Hearst-inspired anti-heroine (“a gun in her hand, but she don’t know how to use it”) who by the final verse has fallen into something even more dangerous: politics. As played that night, the song is fully formed, perfectly presented — a classic performance prized by Shakey fanatics.

Slightly less well-known is the epic, fullly electrified arrangement of the tune that Neil took out on the road a few weeks later during CSNY’s coke-fueled Doom Tour. Like a lot of the music made by these dudes that summer, “Pushed It Over The End” sounds a bit bloated compared to the pared-down and precise Bottom Line version. But it is still a fun, off-the-rails ride, with Young’s fuzzed out, feedbacking guitar battling Stills’ electric piano over an almost reggae-fied lope. “Did those dreams of yours come true?” Neil asks the stadium full of ex-hippies during the song’s chorus. The dark and unresolved “Pushed It Over The End” suggests the answer is a resounding “no.” words/ t wilcox