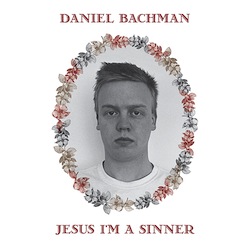 Is Daniel Bachman the Robert Pollard of the American Primitive set? In terms of pure unstoppable output levels, it’s starting to look that way. Since about 2010 he’s been releasing music at a furious clip, including singles, cassettes compilation tracks, collaborations, and tour CDRs. Jesus I’m A Sinner is his third full-length album in less than two years, coming hot on the heels of 2012’s Oh Be Joyful and Seven Pines. The good news is that the law of diminishing returns does not seem to apply in Bachman’s case; Jesus I’m A Sinner is his strongest, most assured LP to date. It’s also his most diverse, mixing purely solo recordings with some great collaborations.

The album kicks off with the gorgeous “Sarah Anne,” Bachman’s first composition for lap guitar and he handles the instrument like he’s been playing it his whole life. From there we’re treated to such beauties as the chipper “Honeysuckle Rose,” the absolutely wonderful “Happy One Step” (a  guitar/fiddle duet with Sally Morgan of the Black Twig Pickers) and the eerie, dream-like “Under The Shade Of The Trees.” On previous recordings, Bachman played with such force that it seemed he should be snapping strings left and right. The new record is a bit more reserved, a bit more playful. Not that it lacks energy, though — check out the tense, foreboding closer “Leaving Istanbul (4 AM).” The guitarist isn’t stopping here — he’s already got Jesus‘ follow-up slated for early 2014. Keep ’em coming, Dan. words/ t wilcox