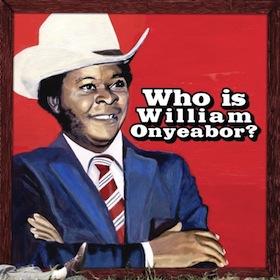 It’s the question asked by the fine folks at Luaka Bop with their new collection, Who is William Onyeabor? This, the first compilation of the Nigerian synthesizer-wielding bandleader’s work, reveals the musical answer to said question: He was a songwriter with groove in mind, recording from 1977-1985. Onyeabor stretched his dance floor incantations denouncing war and injustice past the 10-minute mark, employing minimalist rhythmic grooves, clipped guitar and a chorus of female singers. At times the songs sound like Parliament Funkadelic jamming with Kraftwerk, a sound which parallels the Kosmische rhythms and melodies that were profoundly shading nascent hip-hop tracks over in the States.

The other half of the question — No really, who is this dude? — is less fully resolved. Luaka Bop was able to secure Onyeabor’s permission to release the music, which culls nine tracks from his discography, but the man himself wasn’t keen on addressing the many rumors that have orbited his covert star. Some reports suggest he became a filmmaker in Russia, a businessman in Sweden, or both. What’s fairly clear is that he turned his back on music, devoting his focus solely to Christianity. The label’s endeavor to release Onyeabor’s music took ten years, and their quest to pin the man down often revealed more questions than answers. But in the end there is some beauty to that: We have only these recordings to know Onyeabor by, and with repeated listens the mystery becomes less a series of unanswered queries and something more like a sermon. words/ j woodbury

5 thoughts on “Who Is William Onyeabor?”