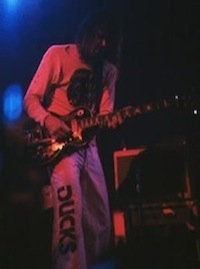 In honor of the man’s 68th birthday today, let’s take a listen to a recently surfaced rarity from the summer of ’77. Neil spent much of that year out of the limelight, only to surface with the short-lived Ducks, a band that included former members of Moby Grape. With multiple vocalists and songwriters, this little side-trip suggested that Neil was trying to recapture some of the team spirit of the Buffalo Springfield. Playing mostly low-profile gigs in Santa Cruz, the Ducks premiered several new Neil tracks, including “Sail Away,” the still-unreleased “Windward Passage” and “Little Wing.”

The latter tune would pop up on Hawks & Doves in a hushed, solo acoustic version a few years later. The electrified “Little Wing” here is a bird of a different feather, with Neil’s distorted guitar leading the way into a mournful dirge. “Little Wing, don’t fly away / When the summer turns to fall,” Neil sings achingly. Of course, he did just that soon enough, leaving the Ducks in the lurch once September rolled around. They don’t call him Shakey for nothing. words/ t wilcox