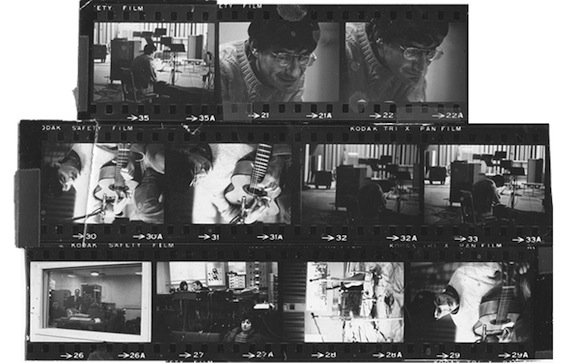 Guitarist Peter Walker spent decades off the grid, but reemerged in 2006, when he contributed recordings — alongside James Blackshaw, Jack Rose, Thurston Moore, Steffen Basho-Junghans, and others — to Tompkins Square’s A Raga for Peter Walker tribute. Since then, a slow but steady stream of Walker material has become available: Two new recordings of Spanish guitar, a previously unheard jam session recorded in Levon Helm’s barn, Long Lost Tapes: 1970, a collection of lost sessions, the sublime Has Anybody Seen Our Freedoms, on Delmore Recordings. Now, Light in the Attic and Vanguard Records have teamed to re-release his long out of print sophomore album, 1968’s “second Poem To Karmela” Or Gypsies Are Important. 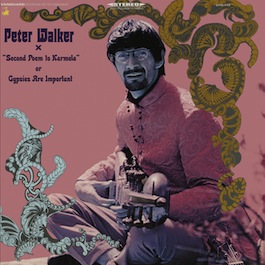 Teeming with Jim Pepper’s flute and the fluid ragas of from Walker on guitar, sitar, and sarod, the album explores the intersection between 60s psychedelic experimentation and some of the oldest musical traditions in history. A compatriot of Timothy Leary, Walker understood the role of music in his LSD experimentation, and the record taps into some of what might have been heard at one of the Walker-soundtracked “Acid Tests.”

With renewed attention being paid to his records, Walker is performing live in the US once again. He’ll do so on April 11 at McCabe’s Guitar Shop in Santa Monica, sharing the stage with Vanguard/Light in the Attic label-mate Bob Frank. The performance ought to make it clear that while Walker was out of the spotlight, he spent his time diligently with a guitar, studying in Spain, exploring the historical connections between folk, Indian music, and Spanish guitar.

We spoke to Walker from his home in Woodstock, where he spends his time when not playing guitar in Peru.

Aquarium Drunkard: I’m curious about the era just after your Vanguard recordings. You recorded Has Anybody Seen Our Freedoms, by yourself. What influenced your decision to record that record solo?

Peter Walker: I learned solo, for one thing. I was solo when I learned to play. I traveled a lot during those years — I still do I guess, but more then — and I lived for several months in Mexico, where I played solo; I lived in North Africa, where I played solo. I studied solo guitar in Spain.

But here in New York, I was able to get a pick-up band. When I traveled they weren’t with me, so I was able to play solo. When I was in the city, I had a band, but when I’m traveling I’m alone. So I wound up writing [the songs on Has Anybody] alone. I’d been playing festivals alone, all through the Midwest. So when I went in the studio I cut the stuff I’d been playing the summer before.

AD: In addition to the re-release of records like Second Poem To Karmela or Gypsies Are Important and Has Anybody Seen Our Freedoms? you’ve been working on new material. What does it sound like?

Peter Walker: From 2000 on I went to study Spanish guitar in Spain. What they taught me I’ve been absorbing. It’s a different way of looking at the fret board. My next album is going to be solo guitar, and I’m going to be playing one piece in each key: A, B, C, D, E, F, G. Pretty much different modes of the keys. That’s what I do every day. To me it’s fascinating, because I can start in any key or mode and compose something. So that’s what I love to do, that’s what I’m going to record next.

I also want to do an album of tunes on piano. That’s part of my plan. The idea is to do two more albums: one of Spanish guitar, mostly sung tunes from a collection of songs I play piano.

AD: Do you play piano a lot?

Peter Walker: Not a lot, but I like to play piano. If I’m home, I can tune the piano to the key that I’m going to play in. If I’m on the road I have to accept whatever they’ve got. But I want to do the album because I’ve been playing the tunes for 30, 40 years. I want to put them down on vinyl, on wax or digital or however you record.

AD: What kind of songs do you play on the piano?

Peter Walker: Mostly a collection of other people’s songs. A few that I wrote myself. [But mostly a] few that I like that other people wrote, like Judy Mayhan. She writes great songs. Timmy Hardin was a great friend of mine. I’d like to do one of his songs.

AD: Are these songs that reach back to your folk days?

Peter Walker: [They are] songs that touched my heart. So you keep practicing them over the years. I’ve got this very polished material in my repertoire, so I want to get that recorded.

AD: The list of people you associated with back in the day is incredible: Timothy Leary, William Kunstler, Karen Dalton…you spent some time with the Beatles, too, correct?

Peter Walker: My friend Raul Danks [note: Danks can be heard on Light in the Attic’s LHI boxset, There’s a Dream I’ve Been Saving] opened for them. And then I met their press agent, Derek Taylor. I met George Harrison at the [Ravi Shankar school] — we were there together a couple times. I hung around with John Lennon. He sent his road manager Peter Bendry up to Woodstock to check in on Indian musicians. People who played Indian music. He came and found me and we traveled together a couple weeks. So I played for John one night. It really wasn’t my best night; he gave me a Hauser guitar to play, and I really couldn’t get it to do what I do. It didn’t have much sustain. So I can’t point to it as one of my better moments [laughs].

AD: Do you listen to new recordings much these days? What do you spend your time listening to?

AD: It’s the source for you.

Peter Walker: That’s how they express it. I went to this one jam session, and if you didn’t play well they would beat you up and throw you out. But I went there and I was allowed to stay. At the end of the day, a lady grabbed me by the shoulders, the daughter of the owner, and she said, “We’ve been doing this every Saturday night for the last 492 years, and we see in your eyes how much you love our music. We want you to know you’ll always be welcome. Come and drink from the well with us.”

I’m going to write a book called “The Well.” It’s going to be the story about how that music got to Spain from India in the mid-8th century. The rest of the gypsies came from Northern Europe, Pakistan and India, a land migration, in the 17th century. But the Calî³ gypsies of Spain were brought there as prizes of war from Madras and Bengal. They brought with them the music that was popular at the time. So I guess if I have a message, it’s that flamenco music is form of Indian music.

AD: You explore Indian music on “second Poem To Karmela” Or Gypsies Are Important, and you’ve explored flamenco music in the last couple decades. But the styles you’ve explored all connect organically.

Peter Walker: It all connects musically. The notation system the Indians did, they brought it to Europe. And Europe copied their homework. According to Ali Akbar Khan, we all owe our musical traditions over the world to the ancient Indian carnatic tradition. I did my homework on the ground, and I agree with it. I 100% agree with it. He’s right. It’s true.

AD: Your career was revitalized by the Tompkins Square tribute. Did that album surprise you?

Peter Walker: That was a total shock. I was upstairs, I was packing. My plan [for my career] was entirely different. My plan was to play for a singer in Spain, in a competition, and if I could win one of the top four competitions in Spain, if I could win any prize in any one of those, I could automatically tour within the flamenco association world. Venues employ flamenco players every weekend, and if you win a prize, everyone wants to hear your stuff. You’re employed for the next year or so. That was my plan. I figured if I could do that I’d be made in the shade as a player. But the competition is incredible. I was getting ready to go over and compete when Josh [Rosenthal] from the record company knocked on my door and asked me to do the tribute album. He didn’t know I was playing Spanish guitar then.

AD: So it realigned your plans?

Peter Walker: It sort of stopped my progress in the Flamenco world, and restarted my old career again! But by then I was no longer doing what I was doing back then, I was doing something different. But I still have a ways to do. It changed direction completely. I can play appropriate flamenco, and I can play flamenco that is not really flamenco. The gypsies discussed that with me. I didn’t grow up in that culture — I grew up playing Western music, but I learned how to play Indian and Spanish music. Whatever the style, the music I play comes from my heart. words / j woodbury

Previously: Peter Walker :: Has Anybody Seen Our Freedoms?