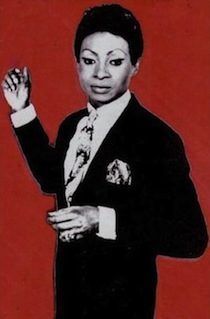 Jackie Shane was a gay, cross-dressing soul singer born in Nashville, TN in 1940. He made his away across the Canadian border in the early ’60s and, in 1963, scored a local and soon forgotten hit in Toronto. The song was a cover of William Bell’s “Any Other Way“. Jackie replaced the country-soul flavor of the Bell original for a slower, gracefully hushed serving of smooth. The result is a languid and absolutely majestic gem of soul music, with piano and horns swirling together in a kind of forlorn sway. And then there’s Jackie’s voice – completely androgynous – soft and cool at one moment, trembling high, and the next cutting deep and low. Jackie owns this material, and when he sings “Tell her that I’m happy, tell her that I’m gay”, it resonates with new meaning. In the not entirely progressive 1963, Jackie delivers with awe-inspiring confidence.

Jackie Shane :: Any Other Way

A consummate performer, check out the below (definitive) rendition of “Any Other Way”, culled from a live album Jackie released in 1963. Further slowed down, Jackie’s delivery is looser and more ragged. “Be sure and tell her this,” he asserts, before singing, “Tell her that I’m gay”, riffing off the lyrics in a way that only augments the confidence and realization of his androgynous identity. This is fully evident about halfway through the performance, as Jackie eases into an extended vocal break. The band plays on faithfully as Jackie preaches his truth. “I live the life I love and I love the life I live…I won’t have it, baby (and I sing sexy too, that helps), any other way…”

Elsewhere: For more on Jackie, dig into this great CBC Radio documentary from a couple years back. A comprehensive look at both the artist and the Canadian soul scene in the early 60s. words / c depasquale