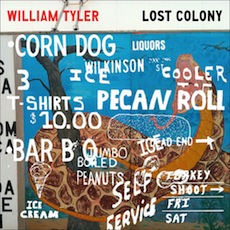 Accept no substitutes! William Tyler’s Lost Colony EP is the only piece of music you need in your car this summer. Or any season, really. The wide-open, panoramic sonic vistas on the three tracks here seem tailor made for epic, exploratory road trips. And Tyler’s been doing plenty of road-tripping in the past year, touring nonstop in support of last year’s masterful Impossible Truth. The Nashville guitarist was playing solo shows during that time, but Lost Colony is a full-band effort, bringing drummer Jamin Orrall, pedal steel player Luke Schneider and bassist Reece Lazarus into the mix. The results are positively wonderful. Tyler, of course, is no stranger to the rock band setting, having paid dues in Lambchop and the Silver Jews. But the sound here is all his own, finding fertile common ground between classic country rock and classic krautrock. The connection is made explicit in the glorious cover of Neu! mastermind Michael Rother’s “Karrusell,” which captures the pristine motorik groove of the original, but also choogles like a motherfucker. The centerpiece, however, is “Whole New Dude,” a sun-kissed 13-minute ride that easily places Tyler in the upper echelon of the recent crop of guitar anti-heroes. Put the key in the ignition, roll down the window, crank up the stereo and hit that highway. words / t wilcox