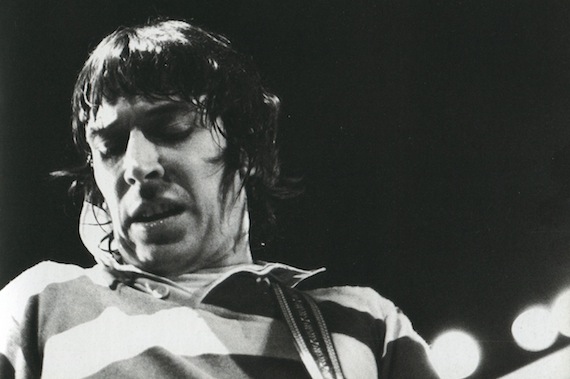 In the mid-70s, John Cale recorded a trio of solo albums for Island Records. Ever the forerunner of avant-garde, Cale concocted a heady brew of proto-punk, glam and art pop aided by the likes of  Phil Manzanera and Brian Eno. One of the more singular moments of this era appears on the 1975 album Slow Dazzle, wherein Cale delivers a harrowing cover of the King’s “Heartbreak Hotel.” Already nocturnal in its original form, Cale exorcises the material, transforming it into a gothic nightmare. Complete with doomy guitars, spooky sound effects and haunted backing vocals, Cale reaches a visceral apex in the performance, growling and screeching the lyrics, inviting forcing the listener to take part as he changes the perspective from “I” to “we”… ‘could be so lonely/we could die.’

Below, Cale’s raving performance of “Heartbreak Hotel” (circa 1981) on Spanish television. Featuring Andy Summers and “Ollie” Halsall (longtime Kevin Ayers collaborator) on guitars, the band takes a wicked trip down Lonely Street. As Halsall channels guitar feedback from his microphone stand, a deranged Cale, donning a trucker cap, white bow-tie and aviators, breaks into a bastardized version of the robot before “dying” on stage…only to rise from the grave and never look back. words / c depasquale