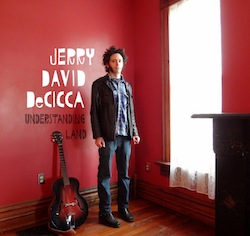 On the back of Jerry David DeCicca’s Understanding Land, his first solo record after fronting folk combo The Black Swans for a decade, the songwriter describes a hike with Massachusetts naturalist Michael Metivier. While walking, Metivier explained the way trees are ripped from the ground during storms, and the way the holes left behind foster new plant life. The idea stuck with DeCicca, informing the songs he wrote following a tour of Portugal and Spain. Staying at a friend’s flat in London, he hung mics from the clothesline and birdcage in her living room and began sorting through a few years’ worth of notebooks. Those resulting songs became the foundation of Understanding Land an album centered around the idea of “rebirth.”

“I feel like it’s a pretty positive record,” DeCicca says from New Braunfels, Texas. Following a period of storms, which included the loss of Swans bandmate Noel Sayre, DeCicca took comfort in the idea of seasons and growth.

The album’s closing song, the beatific “Bloom Again,” punctuates the LP’s hopefulness, “So I stood like a tree/though nature’s bitter schemes/and I waited my turn/to bloom again.” The song was inspired by the Roy Orbison documentary The Big O in Britain, which DeCicca watched in London.

“He had that line ‘I just stood like a tree, and I just bloomed again,’” DeCicca says of Orbison’s reflection on the renewed interest in his music. “He’d gone through these seasons, but he hadn’t really changed, he just waited for it to be his time again. You don’t need to do anything. The world is going to change and grow around you, but nature is going to take its course.”

DeCicca intended the tracks recorded in London to be demos, but they quickly took on a life beyond his plans. Passed on to bass player Andy Hammil, it became apparent that the loose nature of the recordings had potential. “It just kind of grew from there,” DeCicca says. Hammil and DeCicca added drums, vibes, and strings. “Before I knew it, I started thinking of this as a ‘record’.” Contributions from DeCicca’s allies Will “Bonnie Prince Billy” Oldham, Kelly Deal, and Spooner Oldham followed, fleshing out DeCicca’s bare bones recordings.

continue reading after the jump. . .

“Everybody who played on it was just playing to the acoustic guitar, vocal, and bass,” DeCicca says. “Everybody kind of played real simply, to the song, and it all worked out. You know, it’s definitely not the way that I would aspire to make a record, but it was very natural. For me, I’m glad it happened that way, because I didn’t have the chance to over think anything.”

Understanding Land is a quietly confident album, one that settles into a groove and unfolds organically. The spirit of the record translates visually to the video for “Colors in the Sky,” directed by Jonathan Dortch and starring Stanley B. Herman, a veteran of four Darren Aronofsky films.

“‘Colors in the Sky’ is about all the bullshit in the word gets us down,” DeCicca says, “But there are little things that give a sense a hope to keep going on.” words / j woodbury