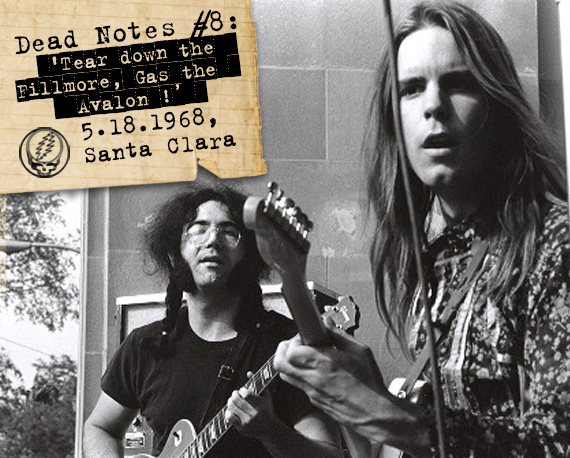 Welcome to Dead Notes #8 where we find our steadfast pranksters in the pivotal years of 1967 and 1968. Long gone are the proto-psychedelic fuzzy garage jams, replaced with long, exploratory suites awash in subtle instrumental and explosive feedback passages as the band weaves from one song into the next. Deep into the recording of their way-over-budget ‘thick air’ opus, Anthem of the Sun, (which finally sees it’s release in the second half of the year) they enlist of help of their old friend, later renowned lyricist, Robert Hunter. Hunter, living remotely in New Mexico and loaded on LSD, crafts a beautiful, allegorical dig at the riffraff who had recently flocked to San Francisco, aptly entitling it “Alligator”. For his efforts he is handsomely paid $250, which he then blows on a used car as he skips town for the Northwest and a job restringing beads on necklaces. Thankfully, the car breaks down and he instead wanders back to his friends in San Francisco. In turn, “Alligator” becomes a big-teethed, bugged-eyed second set monster as the band morphs into an aggressive 7-day-a-week touring machine.

On the afternoon of May 18, 1968 we find the band pulling double duty with a daytime upcoast gig in Santa Clara, at the Northern California Folk Rock Festival, and a night show at the famed Shrine Auditorium in Los Angeles. They are in good company at the festival with Kaleidoscope, Janis Joplin, and their pals in mischief — The Jefferson Airplane, also headlining. The Airplane’s guitarist Jorma Kaukonen had affixed an ad hoc recording setup at the lip of the stage (resulting in one of the crudest live tapes from 1968) that is equal parts mind fuck (the sound dips in and out as he moves the setup around the stage creating an ‘altered’ listening experience) and ear splitting, as you can hear every instrumental nook and cranny of a ferocious “Alligator” that begins with a fan’s cosmic wail. Immediately, we’re thrown headfirst into the lysergic bayou as Pigpen waxes about bad vibes with a calliope stained organ lick that Garcia and Lesh blanket with a sea of heavy notes. As quick as the first section violently strikes with a gnashing of teeth, the band drops out as Mickey Hart chases Billy Kreutzmann’s staccatoed drumming and the ‘Rhythm Devils’ feed a boiling cauldron of swampy, voodoo marching band percussion that soon explodes like a cannonball into the jam. Weir cuts thick slabs of rhythm as the group propels into a hyper jam with Garcia chasing the reptilian tail, nailing every note and chord as fast as possible with hints of Donovan’s “There is a Mountain” — a full year before the Allmans’ version adopted the theme. Someone starts to scream “ALLIGATOR, ALLIGATOR” as they take a bite into “Caution (Do Not Stop on Tracks)”. Pigpen tries multiple times to slow it down with his “All You Need” rap, but Garcia and Lesh blow right past him while continually punishing the groove as it leads into 4 minutes of “Feedback”. The suite of songs is brutal right up to the end, as the last cymbal rattles out to silence leaving the crowd’s mouths agape and their heads forever skullfucked.

That summer, as the band keeps chooglin’ along, Anthem of the Sun is finally released with a gigantic thud. Garcia, frustrated with the bands creative development, preemptively puts their manager Rock Scully up to the task of  ‘firing’ Weir and Pigpen. Band meetings are had. Ultimatums are given. Band folklore claims Weir and Pigpen were indefinitely out for a unknown period of time leading to all remaining members joining ‘Mickey and the Hartbeats’ for a series of loose but lively gigs at the musician clubhouse-cum-venue, The Matrix. To further complicate their plans of psychedelic world domination, their first major European tour (and possibly Japan plus Australia) is canceled leaving the group another 4 years from conquering the old world. The band finally reconvenes like nothing ever happened. Pigpen has sweetened his piano and organ skills, Bobby has tightened his rhythmic chops and the group is racing towards 1969, quickly adapting their psychedelic prowess for the addition of experimental musician Tom Constanten. But that is a whole another Dead Notes chapter in and of itself. words / d norsen