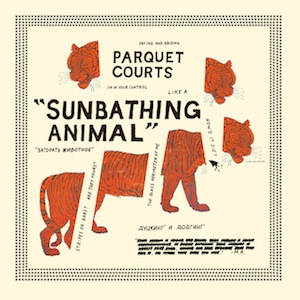 Because of the type of music they play – proudly traditional alternative rock ‘n’ roll that finds its genesis in The Velvet Underground and stumbles forward from there – and because they do it well and in a way that’s altogether fresh, Parquet Courts were doomed from the start to be over-discussed and misunderstood. On Light Up Gold, their breakthrough second release, the Brooklyn quartet shot from the canon, positioning themselves as heirs to their genre’s great riches. Hearing it for the first time in 2012 felt like what it must have felt like hearing Double Nickels on the Dime in 1984: There are so many familiar sounds to hang on to, but they’re being presented in ways that are inarguably new. But Light Up Gold’s acknowledgment of its own lineage made it easy to pigeonhole. Though it was celebrated, the prevailing narrative surrounding the record was that it was a thrilling revival, expertly executed by an amusing handful of stoned transplants.

If you want to, you can just about make the same case for Sunbathing Animal. Indeed, co-frontman Austin Brown seems to goad listeners right into the trap in opener “Bodies,” with its Sex Pistols title, Pavement-aping tone, and bridge ganked from Television. And early single “Black and White” passes reasonably well for The Gun Club at their most straightforward. Those comparisons and others aren’t any more superficial (or inaccurate) than mentioning Fela Kuti’s artistic debt to James Brown, but stopping there does a great disservice to everything that the influenced have done with the influence, and to write it off as a well-played masquerade is to ignore the very nature of art history; who’s ever been truly, completely original, anyway?

So it’s not surprising that the struggle toward self-definition in the hailstorm of other voices is Sunbathing Animal’s main concern. The blistering title track finds Andrew Savage sputtering syllables as the song pitches a ferocious one-note charge, alternating between the pleasurable pull of a lover’s embrace and the foreboding sense that he’s beholden to another for his well-being. The titular animal can’t help but love the sun, Savage reasons, so he can’t be free, and he positions the creature’s happiness as tantamount to ignorance. “Howling like a tethered mutt that broke free for the first time/So proud till he got caught,” he spits. “In his brief emancipation he can feel what I cannot.” It runs up against the way Savage presents total self-reliance and solitude as a dead end over the two-chord jangle of “Black and White,” where he asks, “How does writing letters from the lonely margins feel when there’s no hair on my head?” Even the straightforward guilty-conscience jam “Always Back in Town,” which finds him listing his lover’s complaints about his touring life, doubles back on itself when he sings the title phrase with a caveat: “I’m always back in town – according to you.”

It’s heavy lifting for a bunch of four-minute punk songs, and part of the thrill is in hearing Savage grapple with both the weight of his words and their sheer volume; Sunbathing Animal practically requires you to sit down with pencil and paper to puzzle it all out with him. It seems more than likely that the fallout from Light Up Gold is what got he and Brown thinking about identity construction, but to their credit, the pair phrase their personal problemata as the universal issues that they are. In other words, there’s plenty to hold onto here, many ways to lose your own self in the pleasing roast of Sunbathing Animal’s barnburners.

And like Light Up Gold, it’s on those terms that Sunbathing Animal is its most successful. It pushes and shoves in ways that its predecessor couldn’t; that thirty-minute blast of conflicted power didn’t have time for a meandering breakup song like “Instant Disassembly,” and there was no room within its tight confines for Brown to dust off a wide meditation like “Raw Milk.” “She’s Rolling” tacks twenty or so words at the corners of its six-and-a-half minutes and stretches long, monotonic notes between them, then blasts them out with a nauseous harmonica solo. These stretches come between airtight blasts of post-punk. Nothing feels wasted here, and they don’t make a single move that hasn’t been thought through. As a result, Sunbathing Animal, though lengthier, is tighter and more balanced than its predecessor, and that makes it an easier, more engaging listen.

Somewhat strangely, the blues end up being a major theme. They’re referenced implicitly in the one-note shuffler “Duckin and Dodgin,” in which Savage is hounded by “the lineage of influence” and builds a chorus around on old Lomax recording. And they’re mentioned explicitly in “What Color is Blood?” “The blues creeping down you from your head to your tail,” he sings, “The kind that don’t let you sing along.” Maybe it seems like white-boy affectation, or else the byproduct of he and Brown’s Texas upbringings, but maybe it’s a better way of thinking about what Parquet Courts does than the narrow slacker-rock signifier they’ve been forced to lug around. Sunbathing Animal is a haunted record, after all. Its ghosts are hollowed-out human beings stripped of what they took to be inherent meaning who are now trying to determine the best way to reanimate themselves. Come to think of it, that may be what all rock ‘n’ roll is about, but it’s hard to think of another record so aware of itself as a product of that history – both artistically and personally – and that grapples with it so eloquently while also celebrating it. So maybe it don’t let you sing along, but you will anyway. words / m garner