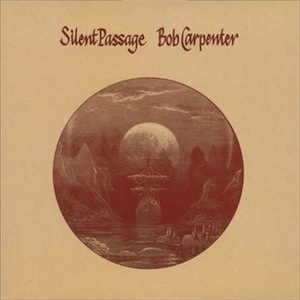 Known names like Emmylou Harris and Billy Joe Shaver recorded his songs, but Canadian songwriter Bob Carpenter’s work has largely been overlooked, spoke of only by true believers and searchers. As is the case with so many lost records, the trouble was there right from the very start: In 1974 Carpenter recorded an album called Silent Passage for Warner Bros. Records, but the label shelved it during contract negotiations.

One look at the credits list and the move seems unthinkable. Producer Brian Ahern put together a cast including his wife at the time, Emmylou Harris, along with Anne Murray, Lowell George and Bill Payne of Little Feat, and session all-stars like bassist Leland Sklar, pedal steel guitarist Ben Keith, and drummer Russ Kunkel to provides tasteful touches to Carpenter’s spectral songs. Perhaps there was some hesitation regarding the album’s tone. Though cushioned by pillowy strings and soft Technicolor flares, Carpenter’s voice is rough-hewed, a wrinkle that even the glossy horns and lite funk of “Old Friends” can’t smooth out. On songs like “Down Along the Border” he sounds scraped raw, and he slurs his way through “Now and Then.” There’s a palpable darkness hanging over the album as well. Many of Carpenter’s peers sang about the road with a wistful longing and romance, but on “Silent Passage” Carpenter seems drawn to it out of necessity or some unnamed dread: “Before the war I had no need for traveling/ indeed I do not know what made it so important to leave.”

The record collected dust for a decade until Canadian label Stoney Plain released in 1984, but it sees its first wide release in 30 years via No Quarter Records on August 19th. Carpenter passed away in 1995, but the record’s mystic country rock vibe has proved to have staying power among the initiated. “I heard of it through Doug Paisley,” says No Quarter founder Mike Quinn. “He played me that tune ‘Silent Passage’ and I was floored.”   words / j woodbury