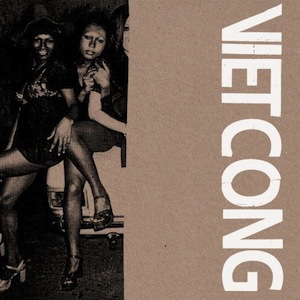 While there are shadows of the aforementioned Women — a certain spooky, claustrophobic, gloominess — this new concern has proven interested in expanded sonic territories, making Cassette a dynamic and absorbing listen, one which strengthens with each listen.

Viet Cong, while indefinable by genre, certainly know who they are and what they are doing. The record kicks off in full-force, with a confidence reminiscent of “See No Evil,” Television’s introduction to the world via their debut, Marquee Moon. Viet Cong’s introduction is a track titled “Throw It Away,” and it features wiry, post-punk guitars (not unlike Television) while inflecting some new wave influence via sheening, rising synths. “Unconscious Melody” kicks off with a drum break, before giving way to Echo & the Bunnymen guitars, vibing off a menacing bassline, reedy synths and violent, frantic vocals — which are accented by short, bleated bursts of guitar — suggesting some kind of major malfunction, emotional or otherwise.

“Oxygen Feed” is perhaps the track most reminiscent of Women, residing in a lo-fi, closed in mix, emitting a gothic angst, though it takes a surprising turn in the vocal bridge — a gloomily soulful performance in which someone is buried, but only so far. The vocals, decidedly distant and drowned out, evoke the sense of a hazy, half-remembered dream, a vibe that carries across the entire record. Emitting cascading bleeps while the guitars subtly come into focus, “Static Wall” gradually channels some kind of 60s haunted, psychedelic pop — like a lost radio signal from a ghost ship sailing in the negative space. The guitars eventually give way to atmospheric, almost tropical feedback — the radio bleeps rise and fall as the ship (perhaps) finally finds solace.

“Structureless Design” locks into in industrial groove before undergoing a seizure of thrashing guitars and changing gears into a propulsive drum-led séance, though the seizures reoccur and the song warps into a psychic freak-out. The cover of Bauhaus’ “Dark Entries” channels a pure, gothic, punk rock energy, aided in no small part by the raw energy and seemingly live nature of this recording. The odd, buoyant synth coda is a charmingly elusive moment that one hopes will come to represent a trait synonymous with this band — striking chords that resonate sonically but remain psychically intangible. The album’s closing track — “Select Your Drone” — does just that, occupying a space of lilting, psychedelic pop before descending into dissonant jam more than worthy of it’s namesake. Screeching feedback, propulsive guitar, echoing vocals, lost in some kind of nightmarish distance — a location just out of reach but not exactly desirable, either.

In seven songs and just over thirty minutes, Viet Cong traverses a landscape comprised of both dreams and nightmares, of pop and horror. Where they ended up is a mystery, but one can only hope they’ll be seen again. words / c depasquale