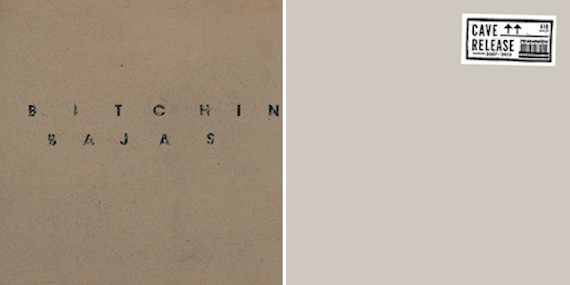 Is it possible that one of the most sublime and transporting pieces of music released in 2014 is by a band with the hard-to-say-with-a-straightface name Bitchin Bajas? Yes, yes it is. The Chicago group’s new, self-titled double LP is a masterpiece of minimalist moves. Drawing from such beloved avant garde composers as LaMonte Young, Henry Flynt, Terry Riley, Steve Reich and others, Bitchin Bajas’ four sides are positively transcendent, weaving a rich tapestry of warm and enveloping drones that hum with cosmic, spiritual vibrations. Turn on, tune in, bliss out.

Cooper Crain, one of Bitchin Bajas’ main movers and shakers, is perhaps better known for his role in the krautrockin’ Cave, truly one of America’s finest bands. There’s no new material from Cave at the moment, but there is Release, a handy compilation of rare and unreleased jams from the Cave archives. This is a group packed with virtuoso players (drummer Rex McMurry is particularly dazzling), but there’s very little showing off. Cave would rather find the perfect wave and ride it together, forever. Release may be a stopgap between proper albums, but it’s essential listening all the same. words / t wilcox